We’re not sure how old our dog, Maddux the Stoic, is. We think he’s around 9.

But I can assure you this: He is definitely now in the demographic of finicky old man.

We don’t know how old he is because he was a rescue. Maddux had a less than stellar start to his first (we guess) couple of years in life, but I’d like to think he has enjoyed his time with us. 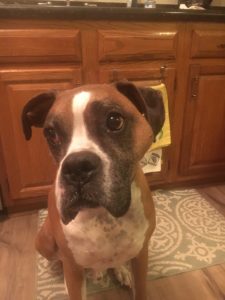 I base this on a few observances over the years:

Maddux is a unique dog, partly because I think he does not understand that he is a big dog. He is equal parts people and small dog, in his mind’s eye.

He is now our only dog, having been one of three at the start of his tenure. Now, it’s just him. And Father Time spares no one, Maddux included. But, in true Maddux fashion, he even faces aging in unique form.

Maddux has a couple of beds in our house, one in our den, and one in our bedroom. Those are his spots to chill, unless, of course, there is a human he can climb on to snuggle with.

Each night, when we head to bed, Maddux relocates himself to his bed and takes a few minutes to dig and claw at the blanket on his bed to get it just right. He then lies there until we are asleep, at which point he slips onto the bed for the rest of the evening, so I wake up most mornings with a big ol’ cuddly boxer with his head plopped on my shoulder, snoring his night away.

Used to be, in the mornings, we would just open the back door, and he would go out and do his business. A few months ago, everything changed.

A stroll out back would not do, thank you very much. Now, as I am getting my morning coffee, he will trail me, tap dancing wherever I am. And when I approach the leash hanging by the front door? Oh, it is game on, tap dancing times 100.

So we dutifully take our walk through the neighborhood each morning, and he spends his time walking as slowly as possible to ensure that he stops and checks out every dog that has come before him (spoiler alert: It’s a lot).

It’s actually a quite nice time, except when it’s raining, because – fun fact – boxers are allergic to water and it burns with the white-hot intensity of the sun. Either that or they are really wimps when it comes to water. One of the two.

I’m fine with the change in the morning routine. I don’t know if it comes with him just being an old man who wants to take a stroll with me. I enjoy our morning jaunts. Besides, when we get back, he can resume his normal routine of climbing in the lap of anyone who’s at the house. He may be in the twilight of his time, but I hope it is a long twilight, filled with as many morning walks and as many sniffs along the way as he deems necessary.