On the morning of my daughter’s 15th birthday, she insisted we be at the DMV the moment it opened so that she could get her permit as soon as possible.

On the morning of my son’s 15th birthday, well, it was a Saturday, so he probably slept in. I might have made mention of him being able to take the permit test, and his answer would have most likely been a shrug or a “Yeah, at some point, I guess.”

As the weeks and months passed, I would bring the topic up more often to him. Same response. At one point he asked me if we could just get a golf cart. He was a bit bummed when he found out those required licenses, too.

But fast forward 10 months later, and a switch flipped. I asked him if he had read the DMV book I had gotten for him in preparation for the test. He had that look all children do when they feel so much more hip and with-it that their parents. “Uh, they have a test app, dad.”

We went to the DMV prior to school. When I got there, I gave them the required documents, including birth certificate and social security card. When I handed them to the woman at the counter, she said, “Sir, these are two birth certificates, long and short.”

And indeed they were. I had merely glanced at the size of the small card and my brain said, “Good enough!” Not good enough. I went ahead and took him to school and told him we’d try again after that.

I came home and began going through drawers and folders where my wife keeps all of our important documents. I could not find his social security card. I called my wife and, in an exasperated tone, shared with her that I could not find the card and now he’s never going to get his permit and I’m going to be his personal chauffeur until he’s, like, 40.

My wife came home and let’s keep in mind – who ultimately found the card in a matter of maybe two minutes isn’t important.

Fast forward to that afternoon. I sat in the DMV office, watching my son start taking the test. It was rather excruciating, trying to read his emotions as he answered each question. I’d see a slight grimace, and then a subtle fist pump. If he cut eyes my direction, I’d look away so as not to make him nervous.

After about 10 minutes, he took a deep breath and stepped away from the testing machine. A smile. A nod. He passed. 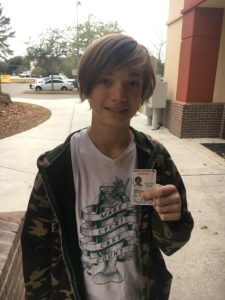 A few minutes later, he had his new permit and was ready to get behind the wheel. As the DMV is located at a rather busy intersection and it was right at 5:00, I told him we would wait until we were back in the neighborhood before he took his maiden voyage as pilot.

I will continue to let him drive in less-than-crowded areas as he gets familiar, just as I did with our daughter. Charleston, SC, has some crazy traffic that, when it’s not standstill, can be less than fun to drive in, and certainly not the best place to cut your teeth initially.

He will also start driving lessons, something that is required by state and federal law. That may or may not be true, but my wife I decided years ago that we would treat that as gospel, so doesn’t really matter if it’s actually factually correct. 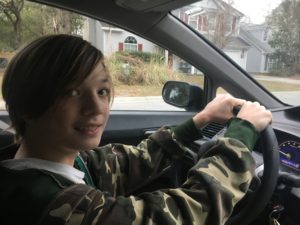 I’m just glad he finally mustered up the desire to get his permit. At this rate, thankfully, he should have his actual license well before he turns 40.