It took six years, but it appears the training is complete. It is time to send our son to join the circus.

Now, lest you think that’s just a horrible thing to say about your child, I think most folks who have met Parker are nodding their heads and saying, “Yeah, that seems about right.”

It started six years ago, when he was nine, and we got him a pogo stick for Christmas. It was only a few days later that he had mastered said stick and was doing most of his personal transportation via pogo stick. He also enjoyed playing basketball on the pogo stick and playing harmonica on it. Why? Because he’s Parker, that’s why.

Fast forward a few years, and he received a unicycle for Christmas. That was a big hit, and while it took a little more time than the pogo stick, he was quickly traversing the neighborhood predominantly on unicycle. As he would head off, often with his fishing pole slung over his shoulder, I would remind him, “Should you do anything that catches the eye of a concerned neighbor, it will be PRETTY easy for them to narrow down who exactly you are, as there aren’t a lot of fishing-pole-toting-unicyclers in the area.”

So this year, we are confident that he has completed his training, and there is nothing else we can do for him. To wit: He can now walk on stilts.

He received the stilts Christmas morning, and he said that he would put them aside and do some research on stilts and stilt safety, and perhaps schedule a class to learn about the nuances of stilt walking.

Kidding, of course. He immediately began strapping on the stilts, right in the middle of the den. I suggested he pump the brakes as (a) we needed to go outside to start the training and (b) no stilt walking inside. I am pleased to report he was perfect at adhering to the first rule.

We went outside and strung up his slackline. For those of you not familiar with a slackline, it’s a thin strip of trampoline-type material that you string up between trees, and you can walk it like a tightrope or bounce on it like a trampoline. More for the circus resume.

He had used the slack line to help learn the unicycle, stringing it higher than normal so that he could use it as a guide as he learned to balance. He would take the approach with the stilts. However, while it took a few weeks to master the unicycle, he took to the stilts a bit faster.

As in first try. 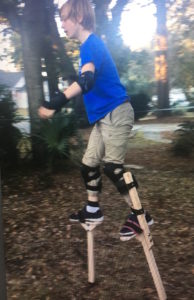 In no time, he was strolling around the front yard. He marched steadily over to the front porch, standing at what we would later measure at 7’4”, and noted that he could now help me get the Christmas lights up and down at the front of the house. No more ladder for decorations? I’ll take it!

He walked around the front yard for a good hour. I got a hoot watching cars slow down and check him out as he strolled around taller than Shaq. After a while, he was starting to get a bit tired, and he decided he’d take a break.

We headed inside, certain that the stilts would be shelved until the next day. My wife and I were sitting in the den, when we glanced back to the kitchen. And there came Shaq Parker, strolling along, checking out the tops of the cabinets. So much for rule (b).

So now that he can add this to his list of talents, I think it’s clear that he is destined for a life on the road. Time to find him the right circus to join. As soon as he helps me take down the Christmas decorations.