And the silent cowboy rode off into the distance, knowing the town would be just fine. “Who was that cowboy?” someone asked. “We’ll never know. We’ll never know,” I said.

– Ending to a Western novel I just made up.

So my wife and I were having a leisurely stroll on a South Carolina back highway the other day. We were chatting about matters of great import, as folks are wont to do on backcountry roads. I think the particular matter was what to do for dinner.

And then up ahead we saw movement. Green movement. Big movement. Because a big ol’ tree decided that was the perfect time to uproot and come across the road.

I am not sure what either of us said, but let’s go with, “Wow!” or “Golly gee willikers!” or something else g-rated.

I hit the brakes and pulled off to the side of the road. There was a house and driveway right there, which was fortunate as driveways on this stretch of road are often miles apart.

I called highway patrol on my phone (*HP for you folks in South Carolina!), and went to assess the situation. The tree was blocking the westbound lane and then some. It had turned this 55-mph stretch of highway into a one-lane road.

Realizing we were about to have some serious traffic issues, I handed the phone to my wife so she could finish giving details to highway patrol. I went to the road and saw a line of cars approaching. I began frantically waving my arms, and doing kind of a bowing motion with my arms to get folks to slow down. My wife finished up the call giving our location and took a spot slowing the eastbound traffic. Another motorist saw what was going on and pulled over to help with traffic control.

We were waving one lane through at a time, hoping highway patrol would get there soon. And then The Cowboy appeared.

He pulled his big black pickup truck past the tree and then crossed over into the oncoming lane. He put his truck in reverse and backed right up to the fallen tree.

He stepped out of his truck, and didn’t say a word. Because The Cowboy wasn’t here to chat. He was here to get things done. He was an older gentleman who looked like Richard Petty, complete with a perfect mustache. He wore a black cowboy hat, a big shiny belt buckle, and black boots. The mudflaps on his truck said, “Cowboy life.” I kid you not. I am not positive, but the theme from “The Good, The Bad, and The Ugly” may have started playing (at least in my head). 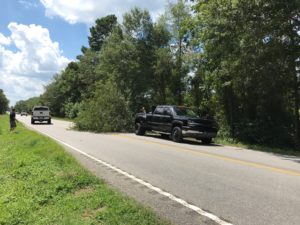 As we continued to get the cars past the tree one lane at a time, The Cowboy grabbed a strap out of his truck, hooked it around the tree, and then attached it to his truck. He got back in his truck and hit the gas. The tree moved a smidge. One more try. A little more. A third try, the tree came free. But when the third try dislodged the tree, it also skidded his truck into a ditch. The Cowboy got out, cleared the remaining debris off the road, packed up his strap and headed back to his truck. I walked over and shook his hand and told him thanks. I asked him if he thought he could get his truck out of the ditch. He responded the only way The Cowboy would: “I reckon.”
He gunned his engine, climbed right out of the ditch, gave us a thumbs up and headed off into the distance.

Highway patrol did not show up by the time we left. I am sure that when they arrived, they wondered just where that tree blocking the road was. But it was gone. As The Cowboy had arrived and taken care of business, as is The Cowboy way.