I graduated from the University of Alabama. I met my wife there, who is also a graduate. My parents went there. My sister went there. And, like, 85 percent of my family went there.

For those of you who are not familiar with college football loyalty, it is one of the higher loyalties in life.

So you can imagine it felt very strange for me recently when I found myself in a sports pub, wearing a South Carolina Gamecocks shirt.

I found myself in this unfamiliar territory thanks to my daughter and 1980 Heisman Trophy winner George Rogers.

You see, my daughter is starting as a freshman at South Carolina in the fall. When she told me of her decision on school, I immediately kicked her out of the house and told her she had betrayed us all.

Ha! Little bad parenting humor there. When she went and visited the campus, she was immediately smitten and knew she had found her home. And that was enough for me. I certainly don’t ever want her to choose a college based on who her dad roots for on Saturdays.

So imagine my inner-conundrum when my 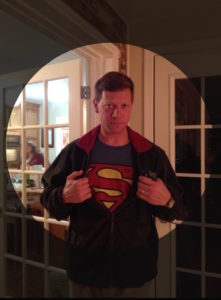 daughter came home from her visit and presented me with a Gamecocks T-shirt. She played a little bit of dirty pool, however. She got a Gamecocks T-shirt with Han Solo on the front, knowing (a) I’m a diehard Star Wars and fan (b) if your daughter gives you a T-shirt, you’re gonna wear the T-shirt. (My daughter gave me a Superman T-shirt a few years back, and I can tell you that I not only wear the heck out of that shirt, but also got her to change my picture on her phone when I call to me pulling back my jacket to reveal the Superman logo.)

Fast forward a few months, and word came out that Gamecock legend George Rogers was going to be doing an autograph session (free, no less) at a sports pub a few blocks from our house. I told my daughter that, as a new Gamecock, she had to go and meet George Rogers. She said, “Who?”

Sigh. In fairness to my daughter, she is (a) relatively new at being a Gamecock and (b) really not that into sports. I explained who he was and how he was kind of the face of USC football. “Cool,” she said. Teens are expressive that way.

This was my first time meeting George Rogers, and he absolutely lived up to the hype I had heard about him. He has an infectious happiness, paired with a booming voice and a hearty laugh. He treated every person who came up for an autograph as his new best friend.

As my diehard Carolina brother-in-law said, “It should be a requirement in South Carolina that if you’re feeling a little down, go hang out with George for 15 minutes.”

When it was our turn, we approached the table Rogers was sitting at. My son, wife and daughter’s boyfriend were also with us, but I told Allie I 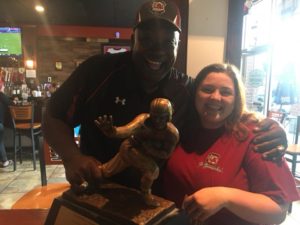 wanted her to go first. We approached the table and I said, “My daughter will be a freshman at Carolina next year, but her mom and I are both Bama grads. So, Roll Gamecocks!”

Rogers boomed a laugh and said, “I like that! Roll Gamecocks!” He signed memorabilia for us, and insisted that each of us get a picture with him while we were holding his Heisman. 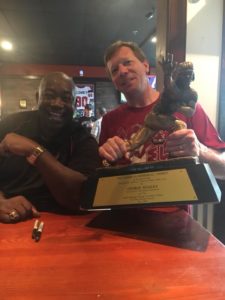 While I received some understandable ribbing from college buddies for sporting a Gamecock shirt, I have no regrets. I’m a Bama grad, but a Gamecock dad. And my daughter got to meet one of the all-time Gamecock greats, which is a great way to start off your time in Columbia.

If you ever get the opportunity to meet George Rogers, I highly recommend you do it. I guarantee your happiness level will go up. And, if you do, tell him I said, “Roll Gamecocks!”