Eighteen years ago, I was eagerly awaiting the arrival of my second child, and only son. Our daughter was two years old at the time, and Patrick Whitfield Gibbons was on his way to complete the family. And then, mid-delivery, my wife made an executive decision.

She was in the middle of a C-section, as family members awaited Patrick’s arrival. And then it occurred to her that it was March 17. St. Patrick’s Day. And she wanted none of that.

The doctor told us Patrick was about to be born. “PARKER!” she exclaimed. “HIS NAME IS PARKER NOW!”

The doctor told us she didn’t have to make that decision right now. “PARKER!” she said, with a really aggressive tone. Never mind that she was in a surgery having a small human cut out of her.

“Yeah, let’s go with Parker,” I said. The doctor and all of the nurses agreed this was not a woman to argue with.

We have been blessed to have one of the most spirited, fun, energetic and adventurous kids in our lives from day one. It’s hard for me to wrap my head around the fact that my immediate family is all adults now. I guess that’s equally hard when you spend time around us and realize that there’s really only one person who acts like an actual adult most of the time. (Spoiler alert: Yeah, it’s my wife.)

As a baby, Parker was one of the most easy going critters you could have around. He mostly slept. When he started walking, he mostly ran into things. Constantly. He ran 90 mph through life. One time, we heard him wailing in the den. When we rushed in, we found him standing there, blood streaming down his face. When we asked him what happened, he said, “ I don’t know. I was just playing and then I guess I hit my face?” We took him to the doctor to get what would be the first of many trips for stitches or glue on various cuts. He once even got stitches from a tape measure cut. Because why not? 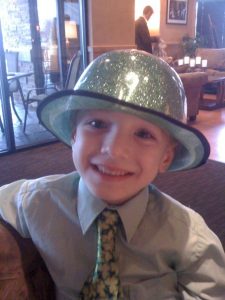 We moved to Charleston when Parker was heading into sixth grade. Admittedly, he was not thrilled about it. He was leaving the only home he ever knew, as well as his close proximity to lots of extended family. While the move was a tough adjustment, he quickly found that living on the coast provided him an opportunity to let blossom a love of fishing.

Parker has always been a unique individual, and that is something we have celebrated. He found early on in life that he marched to the beat of a different drummer, and that drummer played a pretty cool beat.

He rides a unicycle. He walks on stilts. He juggles. He does magic tricks. And he loves nature. Boy, does he love nature. If you gave Parker the option of a day playing video games or a day tromping in the swamp, the swamp wins 100 percent of the time.

Parker is a rare spirit, one that I humbly suggest this world needs. He’s a spitfire who can challenge you at one turn, but then surprise you with his warmth and compassion. He wears his heart on his sleeve, which I can relate to, as I do too. He is fiercely loyal to his family. Even his big sister. They may bicker and argue and get in squabbles on family trips (yes, even to this day), but if it came down to defending her, I am fairly certain he lives by the mantra, “You can’t talk to my sister that way. Only I can talk to my sister that way.”

I’m really trying hard to grasp my brain around the fact that our son is now 18. I’m incredibly proud of him, I’m excited for the future, and I can’t wait to see what’s next. And I’m really glad my wife made that executive decision. It just feels right.