I’ve often seen people post things on social media when their child reaches a milestone, and they state that they can’t believe it’s happened. And while I understand that it can be surreal to see your kid get a driver’s license or graduate high school and head off to college, my wife and I have always taken a bit of a different approach.

This milestone was the best option we could arrive at, hands down.

I get that parents lament the passing of their children’s youth. But we have always maintained two pretty steady beliefs when it comes to parenting: (1) We are trying to prepare our kids for the next step in life and (2) Time only goes one way.

So when our kids reach milestones, rather than lament the passing of time, I look at it more like, “Hooray! I helped get a human across the finish line of a particular life goal!”

And such is my feeling with our daughter, Allie, graduating from college. On Saturday, she walked the stage in Columbia and turned the tassel, becoming an official graduate of the University of South Carolina.

I’ve been to Williams-Brice Stadium a few times over the years, but I have to say this is the first time I have been and not enjoyed a few beers and some wings prior to entering the stadium. Her ceremony was at 9:30 a.m., so that probably would have been a bad idea for myriad reasons.

When her name was announced and she crossed the stage, we had an immense sense of pride and happiness. But not a moment of sadness. 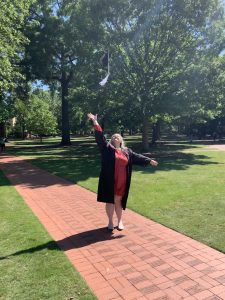 I do not look at this like, “Where has the time gone!?!?!” But rather, “Wow, another finish line crossed. We are CRUSHING this parenting thing! Or at least staying enough out of their way where they can succeed on their own.”

But she is the one who deserves all the credit. Obviously. I didn’t attend any of her classes. I didn’t endure a year of remote learning thanks to a pandemic. The main impact I had on her in college was to suggest that, during parents’ weekend – which happened to be the Bama-USC game – she NOT wear a Bama shirt to the game, where she sat in the USC student section. She’s a Gamecock through and through, but it’s tough to take Bama out of your football spirit when you’re born into the family.

We are very proud of her, obviously. She graduated in three years, with a degree in psychology, and will be attending graduate school at The Citadel in the fall. She wants to be a school psychologist, which I think is about as noble of a calling as you can get. I have always told my kids that they should pursue what they love, and if they don’t find it right away, not to worry about it. It will present itself. I also told my kids – both lefties – that if either could muster up a 95 mph slider, I would highly recommend they pursue a love of a middle reliever’s contract in the majors. Alas, neither of my kids were blessed with lightning bolts for left arms. So school it is!

The next three years of grad school will be a fun and challenging time for her. I am glad she will be near us, so we can see her on a regular basis. And I feel certain that when she gets that graduate degree, she will go and find a job where she makes a difference in a lot of young people’s lives. It’s pretty clear that was what she was destined to do. That said, if her slider does develop in the next few years, I’m going to suggest she keep that option open.