As a parent, there is really no more terrifying feeling than answering a call from one of your children and hearing wailing on the other end of the line.

I received one of these calls the other day from my 16-year-old daughter. I answered the call and heard what sounded like, “WARBLE GLOBBLE FRAMBLE!!!” followed by sobs.

She took a few deep breaths, and eventually translated “WARBLE GLOBBLE FRAMBLE!!!” into “I think I broke my foot.”

She had been at school rehearsing for a play. During one of the dance scenes, she did a little jump move and came down weird. “I heard a pop,” she said. Also not good.

We got her home and I began to inspect the damage. My wife was out of town, and she is the in-house health care provider for most things. It’s not that I am against helping out my kids when they are hurt. It’s just that she is WAY better at it than I am. But I was going to have step up and fill that role, meaning I could not give my usual medical advice, which is, “Wow, that stinks. Hope it feels better soon!”

My daughter’s ankle and foot were starting to swell. I put some ice on it and told her to elevate it. This doctorin’ stuff ain’t so tough! She’d be on the mend in no time.

Yeah, not so much.

She couldn’t put any pressure on it, and she was in intense pain. By the next morning, her foot was turning a gnarly purple. Time for a real doctor.

I took her to get an x-ray. This was where it became REALLY fun to have dad at the doctor’s office with a teen daughter. As they were getting ready to take her back to x-ray her foot, the nurse began asking her a series of questions. She looked over at me and said, “OK, Dad, I now need to ask some, uh, personal questions.”

After a few minutes, the nurse poked her head out and said we were ready to have her foot looked at. I went over to help my daughter into the examination room. When it was just the two of us, we had this conversation:

ALLIE: Dad! They asked me if I was pregnant!

ME: Well, you better have said no.

They x-rayed her foot, and fortunately found no break. The doctor said it was probably a sprain, but that if it continued hurting after a week or so, we may need to get an MRI on it to see if there was ligament damage.

They put a hard splint on her leg and wrapped it tightly. They then gave her some crutches. Have you have ever seen those videos of a baby horse trying to take its first steps, wobbling around all unsteady? Yeah, that’s how she looked trying to use the crutches.

I took her to school and checked her in, and the school assured her she had extra time to get between classes.

About an hour after dropping her off, I got a text from her: “It’s really hard to get around…” Having been on crutches a few times, I concur.

I went to a medical supply place and rented one of those scooter things where you rest your knee on it and roll around. When I picked her up from school, she agreed immediately that the knee scooter was vastly superior to crutches. 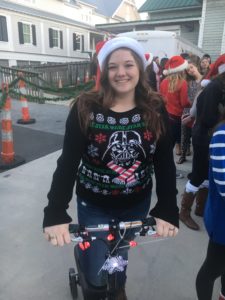 Her little brother, of course, found it remarkably unfair that she got something to ride on. “I wanna hurt my foot!” he said. No, you don’t.

Fortunately, my daughter only needed the scooter for about five days. (Which was enough time for my son to take plenty of laps around the downstairs on it.)

She is pretty much back to normal, so it appears we will not have to get an MRI. I’m glad it was just a sprain, as it could have been much worse. She could have warble globbled her framble.