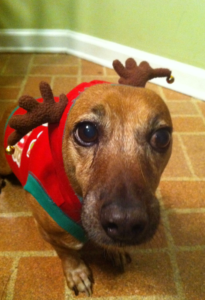 My house is now a little less exciting. We have said our final goodbye to Murphy the Excitable Dachshund, a good boy whose body betrayed him at the end.

The decision to set him free was not an easy one, but it was one that was necessary. Our Murphy had left, and the only thing that remained was a shell of the dog who had brought so much joy to our world for more than a decade.

We never planned for Murphy. I had a co-worker years ago who tragically passed away. He had two dogs, and his brother didn’t know what to do with them. I told him I would take the dogs and try and find them good homes. The first dog was an adorable puppy. Found him a home in about 10 minutes. Murphy? For some reason, he wasn’t on anyone’s must-have list. We had a friend take him for a test drive for a night, but it was not meant to be. So he ended up back at our house. My wife and I were sitting out one evening, our orphan pup sitting between us, when my wife said, “He really is a sweet dog…” Sold.

And thus Murphy became ours. (Or we became his, depending on how you see it.)

Murphy the Excitable Dachshund was was an amazing escape artist, who would routinely venture out from our yard to go find new adventures. I never saw that as him leaving us, but rather him saying, “What are you guys doing inside? There are people to go and meet!” 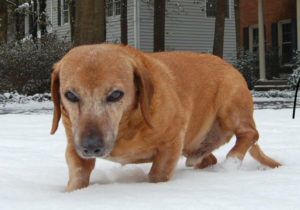 Because of his wandering tendencies, we had a tag with our phone number on his collar. I routinely got calls from folks who had made Murphy’s acquaintance.

We lived on a polo field a few years ago, and Murphy loved to go and greet the polo matches that were out there. I remember one time when some nice folks called us with the news that they had Murphy. I told them I would go out on the field and get him, and they responded, “Actually we’re at a different field now. He was having so much fun with us we kept him with us for a while.” So Murphy was the kind of dog that you would want to kind of dognap for a short time.

One kind soul picked him up one day, and tracked me down at work. I offered to go pick him up, and she said that she could bring him to me in about an hour. “I was making me a steak for lunch, so I’ve made him one, too. Can I bring him up after that?” Murphy was a most talented grifter.

In his prime, he was also an expert critter hunter. If a critter came into our yard, he would find it, and he would bark relentlessly. He especially loved cornering possums. Under Murphy’s watch, we had exactly zero possum attacks thanks to his vigilance. 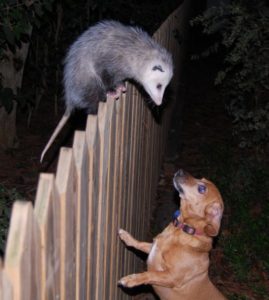 On his final day, I took Murphy to our vet. My wife was meeting me there. I checked in with the vet office, Murphy in my arms, swaddled in a blanket. I told the tech I was waiting on my wife, and I was going to sit out on a bench outside in front of the office and wait for her. As Murphy and I sat on the bench, enjoying our last few minutes of sunlight together, a woman emerged from a store a few doors down. She walked towards me and said, “Is he OK?” 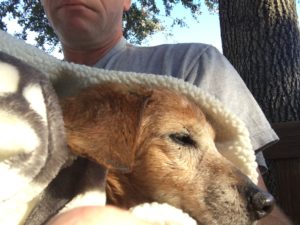 And she did something that makes the world a better place. She came over and gave me a big hug, and said, “I’m so sorry.” She sat down on the bench with me, and talked with Murphy and told him that he was a good boy, which he was, mostly. About a minute later, my wife arrived. The woman stood up and gave my wife a big hug, and said, “I’m so sorry.” She then said, “I’ll let you be alone,” patted Murphy and told him again he was a good dog. And then she walked off. I am fairly certain she disappeared in a sparkly tornado of fairy dust as she walked away.

We went in a few minutes later, and the vet’s office let Murphy go into his eternal slumber with dignity. He sat in my lap, as my wife patted his head, and went to a place where he no longer hurt.

Later that night, I stepped out back. I heard a rustling in a tree. I went back inside and grabbed a flashlight. After a short search, I found a 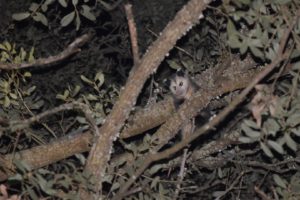 possum nestled a good 40 feet up. While I know how the world works and the realities therein, I sometimes choose to ignore those. And I ignore those now. Because it makes me feel better. Murphy had let us know about one more possum. Rest easy, old pal. 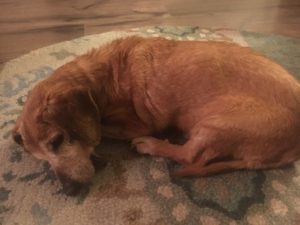