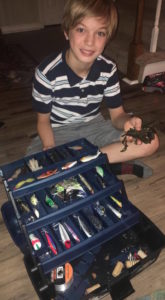 As a parent of two teenagers, I spent a good bit of my time asking, “What are you talking about?”

This can range anywhere from goings on at school to current pop culture to inside jokes that I probably don’t want to know what they are talking about.

But of late, the main cause of this line of questioning has been related to fishing.

Yes, fishing. My son got into fishing a few years ago, and he was content fishing the way I did as a kid: You had a pole and maybe some worms or two and you just did your thing. The point really wasn’t to catch fish, but rather enjoy some time at the water. If you caught a fish, bonus time!

What a difference a few years makes. Since that time, he has taken himself to the furthest corners of the online fishing universe. He follows fishing YouTubers and is constantly watching to learn new techniques. (From some of these YouTubers, I have learned there are a surprisingly high number of people who fish in urban sewers.)

And he studies up on various lures and fishing add ons. This is where we have found a great divide.

My fishing gear vocabulary consists of pretty much rod, reel, line, hook, weight, bobber and bait. And that has served me pretty well for most of my life.

Not Parker. He has amassed multiple rods and multiple tackle boxes for different occasions. Every month or so, he spends some time on the floor, rearranging his tackle boxes and working on his lures.

Speaking of lures, in my youth, there were, simply, lures. I was an unrefined fisherman. My son delights in telling me about all of the lures he has and their functions. And when he has saved up some money to go buy some, I stand utterly clueless as we are at the sporting goods store and he tells me is looking for, among other things, a lipless crank bait, a swim jig, a jerk bait, a senko, a rattletrap, a whopper plopper or a chatter bait. He will pace the aisles, and say, “Dad, I can’t find a buzz bait.” I am pretty much as helpful as a hologram at that point, because I can’t find something if I have no clue what it is.

We also got him something called Mystery Tackle Box for his birthday. This is something that arrives each month in the mail, and it contains a handful of “mystery” lures. This is pretty much the highlight of his month, and something I proudly lord over him.

ME: (Holding the box high in the air): Look what arrived today!

ME: (extending it a little higher)

HIM: I know. Homework and room cleaned…

One month, the box came, and once I finally stopped being mean making him do homework first he tore into it. He looked at the contents list and screamed, “OHMIGOD! A Project Z Shroomz Micro Finesse jig!!!”

I responded, “What are you talking about?”

He explained it to me, but was speaking at such a fast rate I have no idea what he said. As he searched the box, he found the packaging for this prized inclusion. And he saw it was empty. Somewhere along the way, the packaging had come open and Project Z Shroomz Micro Finesse jig had not made the journey. The look on his face was as if I had said, “Hey, by the way, Christmas, Star Wars and Alabama football have all been canceled forever. Also we sold the dogs.”

I assured him the folks at MTB would take care of this, and a quick email exchange confirmed just that. In no time they had righted the situation, and a package arrived a few days later. As my son was frantically tearing open the package, he again explained to me just what this exciting addition to his collection would be used for.

I responded, obviously, with, “What are you talking about?”