Some might say that when you go actively looking for snakes, you probably shouldn’t be surprised when you get bitten by a venomous one.

Well, believe it or not, it’s actually more surprising than you would think.

The favorite hobby my son and I share is looking for snakes in the wild. My father is a herpetologist, and I have been doing this since I was a child. My son has followed that pattern. We love to get out and tromp in the woods and look for any and all critters.

And therein lies the surprise when my son called me while he was hiking with a friend and told me had been bitten. We are always looking for them. And we NEVER handle the venomous ones. Ever. That’s a rule. There is no need. We are out in nature to enjoy the amazing creatures, and unnecessarily handling a venomous snake it just asking for trouble.

I was heading out of my neighborhood on the way to the store when my son called. He had some panic in his voice. “Dad, I just gotten bitten by a cottonmouth.” I knew his general vicinity, a large park with miles of hiking trails. He told me which trail he was closest to. We settled on a rendezvous point which we could both get to in a matter of minutes.

I hung up and called home. My wife answered. I said, “Parker’s been bitten by a cottonmouth. I’ll meet you at the ER.” I’m not even sure if she said a word or just used her mom superpowers to immediately transfer herself into her car.

By the time I got there, he was hobbling up the trail, his friend helping him. I could see the puncture marks on his ankle, and his leg was beginning to swell. It was clear he was in tremendous pain. He told me that he had been in some water about calf deep (not an uncommon thing for us at all). He went to step out of the water and planted his foot on a cottonmouth that he did not see. The snake responded as was its snakey right. I imagine if something that much bigger than me stepped on my back I would not be happy either.

I arrived at the hospital a few minutes later and my wife was only moments behind us. Fun fact: Want to go straight through the ER and back into a room without even stopping to fill out paperwork first? Get bitten by a snake!

We were told that he would most likely have to be given antivenin (starting with four vials), which had to be given within eight hours of the bite. Having familiarity with snakes, I have seen many stories about the cost of antivenin. I asked the doctor how much a vial cost. He looked at me with a curious look. Perhaps he thought I was going to say, “Whoa, that seems a little steep. His leg isn’t THAT valuable.” I was not. I was just bracing myself.

We eventually had to transfer him to a different hospital, as the ER closest to us does not admit patients under 18 for an overnight stay, which he was going to have. In short order, we were transferred to a children’s hospital. Fun fact: A children’s hospital ER on a Saturday night is a super fun place to hang out! It’s heartbreaking to see little ones coming in throughout the night with various ailments and injuries. The folks who man those units and tend to the kids coming in are truly angels who walk among us.

Around midnight he was given the antivenin. The person administering 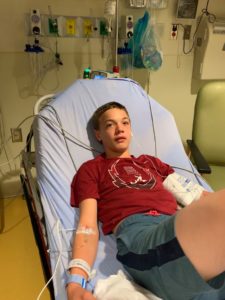 informed him that this was a one-time treatment, and did NOT give him immunity for future bites. I can only assume that disclaimer has to be stated for a very good reason by someone who had previously been given antivenin. (“WHAT DO YOU MEAN YOU FIGURED YOU COULD LET THEM BITE YOU NOW!?!?!?!?”)

He spent two nights in the hospital, the final 24 hours so they could monitor blood work and make sure his numbers stayed good. (I say “numbers” because that seems to be a good catchall to kinda sound medically smart but without having to actually try and nail medical terms that I may botch.)

When we left the hospital, his leg was still plenty swollen and he had to walk with crutches, which he would use for several days after.

He’s back on the mend now, and has even gone back out in the field. Yes, looking for snakes. I know snakes are not exactly beloved by many folks. But they are still loved by us. I value their role in the ecosystem and am fascinated by their mere existence. I will forever be a defender of snakes (and all critters out in nature). Yes, even the one that bit my son. We moved into their neighborhood, and we should respect them. After all, snakes have made it pretty clear: “Don’t tread on me.”