My father has beehives. He got into beekeeping a few years ago, and he and my brother-in-law are the expert stewards of the hives.

The bees provide delicious honey, and are also really interesting critters to watch go about their daily bee lives.

Recently, we were in town and decided to go out and check out the bees. Normally, the bees are rather chill and you can walk right up to the hives and watch them come and go. But when the hives are being opened and the bees are being disturbed, it’s pretty much game on, and if you don’t want to be stung, keep a good distance.

My brother-in-law, Keith, had donned his beekeeping suit, and my son was going to be his assistant for this day. Parker suited up, and they approached the hives.

I stood back about 20 feet, as I have been there before when they check on the hives and stood closer, and let me tell you – that did not end well. My wife opted to watch the bee check-up from our car. As she said, “I know where they can’t sting me.” 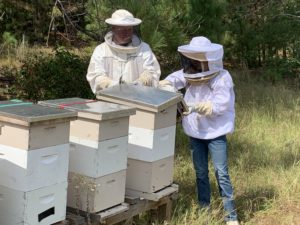 The beekeeping was going well, and I was situated a good distance away watching them assess the hives. And then it became clear something had gone south. Mainly, this was because Parker said, and I think this is a direct quote, “AHHHHHHHHHHH!”

He began sprinting toward me, peeling off his beekeeper gear as fast as he could. “IT’S IN MY HAT!!!!” he screamed, as he tore off the protective top and the hat.

Fun fact about bees: they do not give up on a fight. Parker was out of the suit, but several bees were still coming after him. He began sprinting away from the hive, hoping to outrun the stings. He outran most of them, but logged about five stings on his head and neck from when the bee was in his hat.

I went back to retrieve the shed bee gear. The gloves and shirt were clear of bees. I picked up the hat, and saw a bee was still clinging to the mesh face protecting part. Figuring this bee would want to go home to his hive, I turned the hat inside out and gave it a few good shakes to free the bee. Turns out, he did not like that. And he blamed me.

So the next thing my wife saw from the safety of our car was me sprinting past her and the car, a beekeeping shirt being twirled like a helicopter blade over my head like crazy to try and keep the bee away from my head.

Once I was free and clear of any bee attacks, I went back to the bees (but in the safe zone), and Keith and I agreed our work here was done. I hopped in the car to head out. I lauded my wife on her wise choice at staying in the car.

And we drove about 100 yards when a heard a big BZZZZZZZZZZ in my ear. I swatted at my head, and a bee that had apparently been secretly riding with me presented itself, and proceed to fly towards the windshield. My wife was not exactly thrilled.

I stopped the car and told my to get out of the car. She did. Not my best call.

She stepped out of the car and plopped her foot firmly in a fire ant nest that was covered in sandspurs. She said … well, she conveyed that she was not cool with this current situation. I grabbed a plastic bag that was in the car and managed to use it to shoo the bee out of the car. All the while my wife was trying to delicately get fire ants off of her foot without being stabbed by sandspurs.

We eventually made it out with no more bees riding shotgun and no fire ants hanging on my wife’s foot, and eventually picked off all of the sandspurs.

It’s a small price to pay for being able to watch these amazing creatures and to enjoy their delicious honey. But next time we go check them, just a hunch my wife will let us do it without her.