Prior to becoming a parent, there are plenty of sentences I had never uttered. In fact, I had never even considered saying plenty of them, including:

“Do not feed your brother crayons.”

“Take the underwear off your head.”

“Fine. You can wear a sombrero to school.”

Plenty of those were said when my kids were much younger and, by all accounts, living in a different realm of reality.

Now, my kids are teens, so I don’t as often say things that, as a standalone, make me sound like a person who is just stringing random words together.

But every now and again…

The other night, I was walking inside my house. There, right by the front door, was something that was not supposed to be there. So I came inside, went to my son’s room, and said a sentence I would not have predicted saying pre-kids: “You need to make sure you bring your unicycle inside.”

Yes, my son has a unicycle. It was a Christmas gift, and he was taken to it quite well. When he first got it, we went online and watched tutorials about how to ride one. By most estimates, it was going to take 15-20 hours of practice to learn how to unicycle.

My guess: That estimate is for adults, not teen-age boys who are blissfully unaware.

The first hour or so of practice was just getting to know the unicycle. He would lean up against the garage or the back of a car, and gradually ease up onto the unicle, just learning to balance. He would make a few pedal rotations before being dispatched to the ground.

Fast forward a few hours of practice, and he was moving up the distance a good 20-30 feet before falling off. Add about two more hours – I’d say five total – and we now have his primary mode of transportation.

When I pick him up from school, we usually have this conversation:

ME: Well, why don’t you knock that out when we get home.

PARKER: Yeah, I’m probably gonna unicycle the neighborhood, fish for a bit, and then come home and do it.

And it’s a quite good plan. Burn off some energy on a unicycle, hook a few fish, then come home and rock out some algebra. 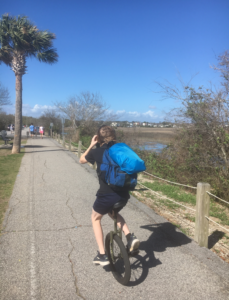 That said, I do remind him that he should bring his unicycle inside. No, it is not likely that a thief will come to our porch, dedicate several hours of training to learn to ride a unicycle, and pedal off. It is also unlikely that a skilled unicycler will happen by and seize the opportunity. What is possible, however, is that someone sees it and decides, “I’m gonna take that.” Why would someone do that? For the same reason people vandalize street signs. Because they just want to make the world a little less better. I hate to be a cynic about things, but it’s just a sad reality of life. You have to be proactive in making sure the cretins of the world aren’t given the opportunity to be awful. And one way of doing that is to bring your unicycle inside.

My son has gotten good at making sure the unicycle is inside each time he’s done, meaning I do not have to utter the previously mentioned sentence often. Granted, I do have to occasionally say things such as, “Hey, don’t unicycle through the kitchen when I’m cooking.” But who doesn’t say that a few times a day?