My son and I were heading down a dirt road to one of our favorite hiking spots when he asked me a question.

“Dad, why do people shoot signs?”

He was referring to a road sign that was scarred up from gunshot. My answer, “I have no idea.”

I should have answered, “Because Mr. Bud Light man doesn’t care about things.”

Stay with me here.

A short while later, we encountered a post on the side of the road. On top of the post was a tall Bud Light can, with an orange flag sticking out of the top. A sign was nailed to the post. It read:

“Dear Mr. Bud Light man and others who dump their trash here… Please stop trashing our National Forest.” It goes on to point out a nearby recycling center that is a mere three minutes away, and shares was it the penalties for littering in the forest. It concludes by saying, “Thank you for your understanding and please help us protect and preserve this incredible resource.” 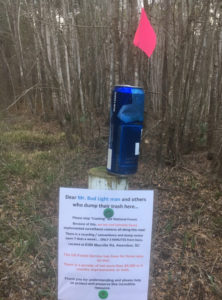 While the sign made us chuckle, I’m unfortunately pretty sure Mr. Bud Light man won’t read it, and even if he did, he wouldn’t care. He’s the same guy who shoots a sign. He doesn’t care. He lives his life how he wants to, and he doesn’t give a lick about how it might affect others.

Basically, Mr. Bud Light man is embodiment of “This is why we can’t have nice things.” We have laws because people consistently do things they shouldn’t. A threat of a fine or imprisonment for illegal dumping and littering really has zero impact on me, as I personally would never consider doing such a thing. And it boggles the mind that someone would. But sure enough, it not only has happened, but happens enough we have to actually have laws saying, in essence, “Yeah, if you could not leave your beer cans out in the woods that would be swell.”

And it’s not just laws that this creates. It also ruins really good things in life we all could enjoy, but Mr. Bud Light man likes to ruin them.

Case in point: The awesome L.L. Bean return policy. They used to have a lifetime satisfaction policy. I was the beneficiary of said policy. I have a pair of duck boots I got in the late 80s. About a decade later, one of the soles began to come apart from the shoe. I sent them to L.L. Bean, and they fixed them. I still have those boots to this day. But Mr. Bud Light man decided to take advantage of this policy, and began buying L.L. Bean products from thrift shops and garage sales, returning them to be fixed, and then selling them. They were essentially flipping duck boots, for crying out loud.

And so L.L. Bean said enough. Now, it’s a one-year return policy, and you have to have the receipt. Thanks, Mr. Bud Light man!

It’s unfortunate we live amongst people who really don’t care about anything, or the consequences of their actions, in particular on others. I personally would not want to live that way, as I feel certain it eats away at your very core to be that kind of person. (Fun fact that I guarantee is 100 percent true: Mr. Bud Light man has never returned a grocery cart to a corral in his life.)

But maybe there is some hope. Maybe there are more of us than him. Maybe the person who put up that sign is one of many, and Mr. Bud Light man is the exception. If we all commit to taking care of the things in our life and not just trashing the world (figuratively and literally) we can stem the tide of all of the Mr. Bud Light men. In the meantime, let’s all just hope my duck boots keep on trucking.