I was heading down the interstate the other day, rocking it out the hardcore way I usually do, listening to a podcast.

Then, right in front of me, I saw a flash of red. I saw an SUV careening off to the left. I have driven on plenty of interstates, and I have found that we generally like to keep going in the same direction (forward), and that hard lefts are generally discouraged.

As smoke and debris began to fill the air, I saw the car go plummeting off the left side, down about a five-foot embankment. Pretty sure that wasn’t an exit ramp.

I pulled off onto the right side of the road in the emergency lane. I grabbed my phone and hit the shortcut number to South Carolina highway patrol. (BTW, it’s *HP. Learn it. Know it. Live it.)

I exited my car and saw several cars had pulled over on the left side, where the wreck had just happened. A guy who had stopped on the other side of the road yelled something at me. Because cars were traveling by at 70+ mph, I couldn’t hear him. A break in traffic came. “CALL THE POLICE!!!” he yelled. “I’M ON IT!!!” I yelled back, just as the dispatcher answered.

The team was forming.

I informed the dispatcher a wreck had just happened and told her where we were. She asked how many people were in the car and if they were injured. Another motorist who had stopped emerged to the top of the road. It’s like he was on the call with us. “TWO IN THE CAR!” he said holding up two fingers. “THEY”RE AWAKE!” he shouted to me. Teamwork, baby!

I relayed the information. She told me police and EMS were on the way. Because the traffic was so busy, I was kinda stuck on the other side of the interstate.

About that time, a man came running up to me on the shoulder. He had been driving a tractor trailer and the red car had smacked into him, which sent them off the road. He was visibly upset, and trying to cross the road. I told him it wasn’t safe, and asked if he was OK. “Don’t worry about me,” he said. “ARE THEY OK!?!?!?” I told him they were awake and EMS was on the way. When a break in traffic happened, he sprinted across the interstate to check on them. Another member of the team. 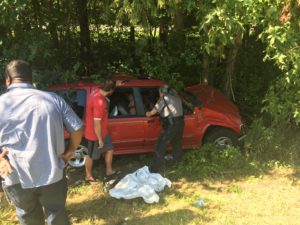 I looked over at my teammates. There were four total. It was mid-morning, but already scorching hot. I had a bunch of bottled waters in my car from a recent outing. I went and retrieved them. One of my teammates saw me coming to the side of the road and help up a hand high in the air. The international sign for, “Throw it!” When there was a break in traffic, I pitched six water bottles his way, and he caught five of them. One MAY have gone a little high and hit the wrecked car, but let’s be honest, a water bottle ding was the least of their worries. I opted to stay on my side of the interstate and head back about a hundred yards past my car to try and slow down motorists. There I was, in a tie, standing on the side of an interstate waving my hands up and down as if I was doing the Wayne’s World “We’re not worthy” wave to traffic, trying to mouth “SLOW DOWN” as clearly as possible.

Most of the motorists slowed down, and several gave me a thumbs up as they drove past. Two people who came through when traffic was a bit lighter slowed and asked if we needed help.

The police arrived a short while later, and as traffic was blocked I made my way across the interstate. The folks in the car seemed to be OK, but obviously rather shaken. The officer asked me what I saw, and I told her. She said I was good to go. My teammates were all standing there. I said, “Well, I’m off to Columbia. Nice work, everybody!” We stood there awkwardly for a second. One guy extended a hand. “Nice working with you, man!” he said with a big smile. Another handshake. Another. Another. The driver of the truck, gave me a strong handshake and told me thanks. I said, “Nah, man, thank you. Safe travels, friend.”

And off I went.

Now, I tell you this story not as a humble brag. I’m not looking for kudos for pulling off the road and helping a fellow motorist. For one thing, it’s hardly heroic to make a phone call to the folks who come out and do the actual heroic things.

Anyone who knows me knows I live for that kind of stuff. I’ve been behind plenty of cars pushing them out of the roadway. I do it because I believe in helping my fellow man. And the reason I decided to make this week’s column about it is that I was so happy to see our team come together. We are, for the most part, and certainly in a crisis, a good people. On that day, a group of strangers came together and helped someone who none of us knew. We formed a team, and we did what we needed to do to get them through a far worse day any of us were having. And, dear readers, that’s what I like about you. I think any of you could have been on that team. Because at the end of the day, it’s pretty easy just to make a phone call when it can help someone out.