It was your usual close to the end of a workday: My co-worker turned to me and said, “We’ve gotta go catch that chicken.”

It all started when I noticed a commotion outside my office window. I saw some people with a stick trying to get something out from under a car in the parking lot. A cat, I assumed, as we have a bunch of cats that hang out near my office.

It came strutting out from under the car, but had no interest in going anywhere. It was just hopping around the parking lot. We watched for a short while when my co-worker, Louise, made the proclamation. Needless to say, I was in.

We headed downstairs and into the parking lot. We are on the second floor of our building. The first floor is a utility company that has a drive-through where the chicken was now trotting about.

There were a couple of people watching the chicken. I said, “Is this your chicken?” I was half-way joking. One of the people turned and said,“Can y’all do something with it?” It was clear she wanted the chicken to be taken care of, but would prefer someone else do it. I’m cool with that.

We sprang into action. We formed a loose circle around the bird, hoping to be able to safely get some hands on it. Sensing the panic, it darted underneath a pick-up truck that was in line at the drive-through. Fortunately, those folks were kind enough to put the truck in park while we were trying to coax it out.

And then it decided to hop up into the truck chassis. It was WAAAAY up in the truck, clucking at me telling me that it was fine there, thank you very much.

One of our fellow bird herders grabbed me a long stick, and I climbed under the truck and gently prodded the bird out. After a few soft pokes, it hopped down, and back into the parking lot.

I turned to Louise. “We need a blanket or a jacket or something to throw over it.” I glanced at Louise’s blazer.

It landed squarely on top of the bird, and I was able to then grab it. Louise retrieved her blazer, and the bird calmed down a bit. We placed it in a box and got it some water and Fruit Loops (the only possible bird food we could find in the break room) and it seemed quite content. It began to purr and cluck to Louise, as they were clearly pals. She named the bird Betty. 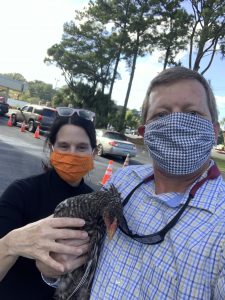 I don’t know where Betty is from. But I know that I work on a very busy six-lane road, and there is no chance that a chicken is ever crossing the road at 5:00 on a weekday. Betty is now at my house, and we have a nice farm home for it to go to soon. Betty will get to go and live out her life as a chicken should – just free to roam in her farmyard world. And not in the chassis of a pickup truck.