I’m no fan of cliches. I try to avoid them in my writing and in my everyday speech. In fact, I avoid them like the plague.

Ha! See what I did there?

Anywho, I recently rattled off a couple of cliches that, in retrospect, were two of the most true things I’ve ever said: “I’m just glad no one was hurt” and “We can replace a car. We can’t replace you.”

Yes, my daughter has had that unfortunate life experience to check off the list: a car wreck.

We got the call the other evening. My wife came darting to the porch where I was sitting. “Come on. Allie’s been in a wreck.”

She filled me in as we sprinted to my car. Allie had rear-ended someone a couple of blocks from our house. She was OK, my wife told me, but obviously a wreck emotionally as well.

When we pulled up, we saw the two cars in the middle of the road. Allie’s car was all kinds of smashed up, with the hood buckled and airbags deployed. The car she hit had much less damage, with just a bit of a mangled rear bumper. 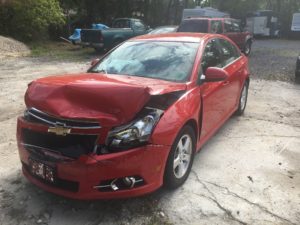 This was one of those parenting moments where you realize that the cliche really is the only thing that’s accurate at that point. It’s like when your wife is pregnant and someone asks if you want a boy or a girl. Yeah, most of us just really are hoping for a healthy baby. Or when you are  a dad out with your kids and someone says, “Babysitting today?” and you respond, “No, I’m parenting.” While that last one might not be a cliche, I felt it needed to be said.

The officer came and gave us an accident report (yes, it was her fault), and car was soon on the back of a truck headed to a tow yard.

I started the insurance fun the next morning. The day after that, we got the news we kind of expected: the car was totaled.

Quick backstory on the car: The car was a Christmas gift to her a couple of years ago from my inlaws. It has been her great uncle’s car, who passed away at the age of 94. Her grandparents decided that it would be a good first car, and surprised her with it. We even had an elaborate reveal that involved a scavenger hunt and concluded with her grandfather, rocking a Santa shirt, pulling it out of the garage to surprise her. The look on her face was priceless, and she loved this car with all her heart. It was her baby.

So, needless to say, the news that it was totaled was devastating.

And while that news stunk, I prefer to look at it this way: The car took the brunt of the wreck so that my daughter didn’t. It was the K-2SO of cars that day. (If that makes no sense, ask a Star Wars fan to explain.) Thank you, Chevrolet, and the safety engineers who made this so. Thank you, Nana and Pop, for passing down a car that she would not only love, but that, far more importantly, would keep her safe.

Allie got back behind the wheel a couple of days after the wreck. The first time I offered the chance, she politely declined. I think she was considering just how bad it would be to ride a bike everywhere from now on. But alas (cliche alert) back on the horse.

We have definitely used the experience to be overbearing parents with copious amounts of lectures and lessons learned. Our daughter has dutifully endured them.

We will figure out what we do from here. She made a mistake, but we all do. I had a wreck when I was her age, as did her mother, and we both became much better drivers as a result. You’re in charge of a one-ton rolling box that, while designed to protect you, is not perfect. Don’t make the same mistake twice.

So we move on. And in the interest of avoiding any more cliches, I will just remind my daughter that her future driving performance should be improved by this, if she learns the lessons it taught. I am confident she will be a better driver now. And she will she show us that is the case with safe driving from here on out, as actions speak louder than words. (See what I did again?)