As we established a couple of weeks ago, my sandals are important to me. (In case you missed it, my sandals were stolen from the beach, in one of the most egregious violations of beach etiquette mankind has ever known.)

My son? Not as tied to his footwear as I am. In fact, given the option, he’d not wear shoes anywhere.

During the summer months, he usually goes with bare feet, but keeps his trusty pair of flip flops with him for when we have to go into some place that has one of those pesky no-shoes, no service policies.

Recently, he and I were at a favorite fishing spot of ours, a bridge and pier overlooking Charleston Harbor. He brought his flip flops with him, as there is a small stretch we have to walk on asphalt, which during July in the south gets a smidge warm.

As we arrived at home from our fishing trip, he was gathering his stuff from the floorboard of the car. “Dad, I’ve only got one flip flop,” he said. “I hope it didn’t fall out of the car.” We searched the car thoroughly, and it was not there.

It was about 8:30 at night at this point, and I told him not to worry about it. We’ll head back in the morning and get it. “Nobody’s going to steal one shoe,” I said. 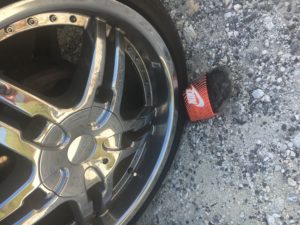 So the next morning I got up and headed out to the pier. Parker was still asleep, so I figured I would surprise him when he woke up. I arrived at the spot and found his shoe, securely wedged under the tire of a car. I tugged. I pulled. I tried a few very terse words. Nothing.

But surely this person wouldn’t be there long, I thought. I’ll run a few errands and head back in a bit. But I’d better leave a note, just to make sure. I found some scrap paper in my car, and scribbled this note: “Dear Driver, My son and I were out here last night, and his flip flop fell out of the car. It’s under your tire. We’ll be back in a bit to retrieve it. Hope you’re having a great day!”

I thought the last part was a nice touch. It then occurred to me that someone might question why I might insinuate that they would take his lone shoe. So I scribbled a post script. “P.S. Not that you would take one shoe. But just didn’t want you to think the shoe was trash and needed to be thrown away. We’ll be back! Take care.”

Fast forward an hour. I went to the house and roused my son. I told him the shoe was probably free by now, and we could go and retrieve it. We headed to the spot. The car was still there. My son said, “It’s fine. I can get new shoes.” No. This is now about principle.

I decided I would walk the pier and see if I could find the car owner.

It was, of course, the people at the very end of the pier, which is probably a half mile walk. “Hey, do you guys have a light blue Honda Civic?” I asked.

One of the the guys turned and said, “Yeah, why?” It was a look that told me I should have phrased my intro differently.

“Nothing’s wrong!” I assured him. I explained my son’s flip flop predicament. He just stared at me. “So, I guess if you guys could give me an ETA of when you’ll be heading out, I’ll come back then and get it.”

“We’ll be leaving in 30 minutes,” he said, and turned and cast his line in the water.

“Good luck on the fishing, fellas!” I said. I’m a people person.

We were heading out of town for the night, so I went back to the house and packed the car and loaded up the dogs. All told, about an hour had passed. We went back. Car still there.

It was after 1:00 at this point so I suggested my son and I would gas up the car and come back.

And then some lunch.

At this point, I’m incredibly pleasant. It’s 8 billion degrees, I just want the shoe, and my original departure time has passed by about two hours.

“Should we go and ask them when they’re leaving?” my son said.

My son hopped in the car, and I grabbed my note to the driver off the windshield. “Dad, don’t you think they’ll wonder about the shoe not being there when they get to the car?” he said.

“I hope so. Because someone who says they’re leaving in 30 minutes who hasn’t left three hours later needs some mental anguish in their life.”

But the important thing is we got the shoe. And I need to remind myself never, ever, ever to let any pair of shoes out of my sight again.