Sometimes, you’re just where you’re supposed to be in life.

I was off to my local grocery store recently, as I was hunting and gathering for the night’s spaghetti and meatball dinner. I parked and headed into the store. As I approached the entrance on the right side of the store, I noticed there was a barricade of carts blocking off the entrance. Odd, I thought. Perhaps the door was broken. Perhaps a customer had dropped a jar of Newman’s Own spaghetti sauce, and the staff was cleaning it up, and it was the last jar of fire roasted tomato and garlic and thus I was not only going to be inconvenienced but spaghetti and meatball night would be just ruined.

I walked toward the other entrance. I saw a young employee emptying trash cans and asked him why the door was barricaded, bracing myself for the possibility of there not being fire roasted tomato and garlic sauce. “There was a possum by the trash can,” he said.

My time to shine.

I reversed course and went back to the barricaded area. I separated two carts and stepped into the quarantined area. There, behind a trash can, was a medium-sized possum, doing what possums do, which is mainly nothing.

As I was sizing up the situation, the door opened. A manager emerged. I took the lead. “I’ll get the possum for you.” He was not quite sure what to make of this. “Trust me, I’ve done this plenty,” I said. Which is true.

I pulled out my phone and called my son, who was on a bike ride in the area. When he answered, I said, “Hey, meet me at the grocery store. We’ve got a possum.” “Be there in a second,” he said. It’s how we roll.

The manager said that he was going to call a pest control company and that he was absolutely not asking me to get the possum. “It’s OK,” I said. “All on me.” I should carry around an “I’ve got this” waiver form.

About that time, my son pulled up on his bike. “Where’s the possum?” he said, in full-on mission mode.

A crowd was gathering at the store door as well as on the sidewalk. I saw the little critter’s tale at the back of the trash can. I told my son I was going to grab it, but he was the front flank, should I miss. (Fun fact: I never miss.)

I darted my hand in and grabbed the possum’s tale and pulled it out from behind the trash can. At this point, I realized I had not planned my exit strategy 100 percent. I said to Parker, “Here, hold this,” and handed him the possum. As I walked to my car to get a cloth bag, I looked over my shoulder and saw a lot of folks staring at my 13-year-old, standing just outside the grocery store front door, holding a possum. I am sure several folks had some parenting questions about me.

I returned with the bag and Parker dropped him in. I tied up the handles, which would be plenty sufficient for the short transport to some nearby woods. 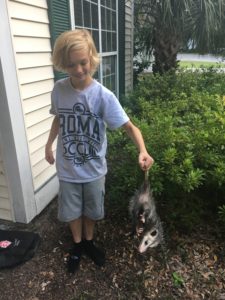 I had quite a few questions from the onlookers. What was I going to do with it? Can’t it bite you? Why? (Answers: Release it. Yes. Because why not?)

I know we’re not the normal family when it comes to wildlife. I’m the son of a biologist who grew up catching critters. My son has led a similar path. We know which ones we can handle and which ones we can’t. Possums, we certainly can. I just wanted to get the little fella off into some woods so he could go do his possum thing for the rest of his life, which I hope does not include staring blankly into oncoming car headlights.

When I returned a short while later for my actual grocery shopping, the store staff shared with me that their day at work had been kinda cool thanks to the possum adventure. Glad I could help.

The grocery store now has, by my count, zero possums. And, more importantly, by my count, plenty of fire roasted tomato and garlic spaghetti sauce.