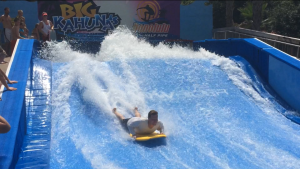 Nothing says good times on vacation like almost losing your swim trunks in front of a few dozen strangers.

This outstanding life event occurred recently at the Big Kahuna’s water park in Destin, Fla. The park has numerous water slides and lazy rivers that are a fine time indeed. But the highlight of the park, in my humble opinion, is the Honolulu Half Pipe.

This contraption is a deep angled wall about 20 feet long. A huge torrent of water is blasted up the hill, creating a steady wave of water. To ride the wave, you take a boogie board and dive down the hill and, ideally, surf the wave for a bit until you are either blasted back up to the top of the hill or the lifeguard deems your ride has gone on long enough.

As I was standing in line, I watched several folks plunge down the hill, lasting for a few seconds before being ejected back to the top. Several others managed to log more time, some even rocking some tricks out there. There was one group in particular of three young teens, and it was clear how they spent their summers: At Big Kahuna, specifically at the Honolulu Half Pipe. They would launch down the hill and immediately start their tricks. They would get on their knees and splash water in every direction. They would flip. They would spin. They would push the boogie board away and let it fly back underneath them. Every one of their turns ended with a blow of the lifeguard’s whistle. I am sure that with some practice I could easily have matched them trick for trick, but since I was a beginner, my main goal was not to have my kids say, “That’s not my dad. My dad is…um…at home…”

When it came my turn, I stood at the top of the slide and stared down at the water rushing toward me. I looked at the lifeguard. She nodded down toward the ramp as if to say, “Hey, old man — kids are waiting. Go.”

I took a deep breath, hopped a few steps and launched myself down the hill.

To my surprise, I was not swiftly returned to the top. Instead, I managed to steady myself and ride the wave for a bit. This is a snap, I thought. Time for some tricks. First trick — get to my knees.

And that trick lasted about a millisecond. The moment I got to my knees, the water decided it had had enough of me. Just as my knees touched the board, I turned slightly sideways, and the water shot the board out from under me, and then sent me following right after. I came to rest back at the top near the lifeguard, who told me I could go again. I didn’t look at them, but I have a feeling those local teens were laughing at me. Game on.

I grabbed the board and launched myself again. I cut left and right and was really riding the waves like a champ.

Feeling my oats, I decided it would be fun to go side to side and see just how much of the water I could cover. Here’s a fun fact — if you turn juuuust the right way on Big Kahuna’s Honolulu Half Pipe, water can do its part to help start undressing you.

I felt the big wave take ahold of my trunks and felt them heading off. At this point, I was at least one arm short of how many I needed, as I needed two to hold on to the board and I needed one to pull up my swimsuit.

Hoping for the best, I hugged the board with my right arm while I tried to work my trunks back up with my left. I turned sideways again, but this time I held my grip on the board. The water was blasting against the underside, and I held it with all my might, all the while trying to wriggle back into full dress. Just as I hitched my drawers back up, the waves caught the board, sending me spinning into two really awesome 360-spins that, as far as anyone knows, were completely intentional.

I eventually gave up on the ride and let the water carry me back to the top, as even 30 seconds of boogie boarding can start to wear you out. It’s even more tiring if you combine dressing with it.

I went on the Honolulu Half Pipe one more time that day, and my second run was better than my first, and not just because I was able to do a few more tricks. The Honolulu Half Pipe is a fantastic ride that I highly recommend to anyone interested in such things. It should the be the second thing they do at Big Kahuna. Right after tightening their draw string.