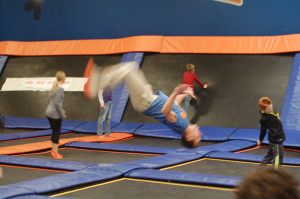 Ladies and gentlemen, mankind has outdone itself again.

Forget space travel and organ transplants and As Seen On TV products. Those are yesterday’s news. I have experienced humanity’s latest great achievement, and it included me hitting a kid in the face with a rubber ball while bouncing on a trampoline.

Yes, I made my first to a trampoline park, this one in Atlanta and called Sky Zone. For those of you not familiar, it’s a giant warehouse filled with floor trampolines. They’re everywhere. There are big sections of floor you can just bounce away on. There are basketball goals. There are big foam pits you can bounce into. And there are dodgeball courts. Sweet, delicious dodgeball courts of justice. But more on that in a bit.

We went with my kids, niece and a few family friends. My wife decided she would serve as a spectator, a decision I feel certain she regretted after about five minutes.

We started off on the open trampolines, just getting our bouncy legs beneath us. I bounced a few times here and there, and then opted for a couple of drops to my bottom or on my back. After a few minutes, I decided warm-ups were over, and I hit my first successful back flip of the day. Just a few years ago, I could do back flips with ease. I can still do them off the diving board, but I have grown wary of trying one on hard ground as I used to do because hard ground is, well, hard. My ups aren’t the ups they used to be. But with the help of the trampoline, I was 21 again, spinning, flipping, and going wild.

And then I realized I was as winded as someone who just sprinted to the Atlanta Sky Zone from Miami. I looked at the clock. We had been bouncing for about four minutes.

After a short breather, I opted for the basketball goals. There were three goals, ranging from about seven feet to 10. I nailed the seven footer with a beautiful 360. I tossed one off the backboard to drill it home in the middle one. And I lost the ball and control of my body and crashed to the trampoline when I attempted the tallest one. It didn’t help my ego that a gaggle of what I can only assume are folks who already have NBA agents were in line practically bouncing up and standing on the rim. After only about 453,000 more attempts, I finally dunked successfully on the tallest goal.

It was then time for dodgeball, which is not only the single greatest elementary school gladiator sports of all time, but also an underappreciated comedy movie classic.

The dodgeball court – or Terrordome, as I lied and told my kids it was called – was a series of rectangular trampolines on a court about as big as half a basketball court. The combatants would line up on their respective walls, about 10 to a team. The referee would call “DODGEBALL!!!” and everyone would start bouncing and whizzing balls at opponents. I stayed alive a good while during the first game, as I bounced on a back trampoline just observing the game. Then, as our team was down to three people, I went to attack and was promptly drilled in the side of the head from a throw that I feel fairly certain came from an Atlanta Braves starting pitcher who merely looked like a 13-year-old kid.

I sulked off the court and watched the rest of the game as our two remaining players got picked off, the last being my son, who was by far the youngest and smallest out there. I felt like I was watching a nature documentary as six teenagers bounced on their trampolines, dodgeballs poised to take out my little gazelle. (He put up a good fight, though, and even had some killer Matrix-style dodges.)

Fortunately, though, I got my revenge in the second game. I was more proactive in this game, deciding I would be bent on annihilation. I may get taken out, but I’m taking somebody out with me. I was whirling as many balls as I could with as much velocity as I could muster, bouncing around the court to find new ammo as fast I as I could. I took out a few folks, including one laser beam that found a young foe’s face. And that was right before I was drilled by approximately 436 dodgeballs.

In all, it was a great day. The kids had a blast, and the kids in their 30s and 40s had a blast. I was unbelievably sore the next day, and my wife told me I could whine for the car ride home from Atlanta and that was it. Despite the next-day discomfort, I’m looking forward to doing it again soon. It’s nice to feel young again. Even if you feel really old afterwards…