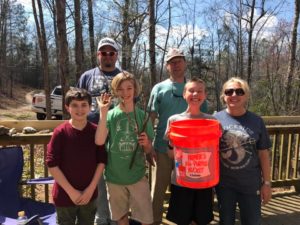 The event we lost was a scavenger hunt. Now it may have been a while since you took part in a scavenger hunt, but I assure you, if the competitive gene is strong in you, I highly recommend you take part the next time the opportunity presents itself. Or, even create one yourself. It’s worth it.

We were out at my folks’ cabin to celebrate my son’s 15th birthday. The cabin is nestled on 100 acres of woods and swampland, and is a favorite rallying place for my family. My son decided it would be fun to do a nature scavenger hunt. Hey, your birthday. Let’s do it.

He developed a list of things we would hunt. Among the items:

My son said he and his cousin, Nick, would be team captains and would hold a draft. My son had the first pick in the draft. So naturally his first pick was … not me? What? He picked his cousin Sam. Surely I would be Nick’s first pick. Nope. Aunt Laura. Well, time to join Parker’s team. Nope. Uncle Ron. Oh, so this is how it is? I was picked last by Nick, setting the two teams.

Before we started on our quest, I made a pronouncement: My mom would be the judge of whether things would be accepted (as no one can overrule Judge Grandma), and we were enacting the “Well, Technically” Doctrine.

That is a piece of international law that states when, in taking part in things intended to be fun, you cannot skate on technicalities. We are going with the spirit of the law, and you can’t bring back a footprint you just made and call that an animal track. Judge Grandma would rule those out.

And off we set. Ron, Sam and Parker set off in one direction, and we set off in another. Laura, Nick and I were gradually adding an item here or there, and spending a good chunk our time being wiseguys and seeing how we could test the limits of “Well, technically.”

Soon, we arrived at a large tree that was tilted up at about a 45-degree angle. I stood under the tree, and estimated it to go up at least 10 feet high. “Hey, Nick, climb that tree and I’ll video it,” I said.

I turned to Laura, my oldest sister. I said to her, “It’s probably a good thing Susan (Nick’s mom) isn’t on our team, or one of us would be climbing the tree.” Upon seeing the video a while later, Susan confirmed that was the case.

We continued to mosey about being our funny selves, slowly adding to our collection. And then we arrived at a spot where we could see a big, open field. And we saw Ron, Parker and Sam sprinting across the field, stopping only briefly to check off items on their list. And that’s when the Gibbons competitive gene kicked in. The three of us began sprinting back toward the cabin. “E! Find something that looks like an E! And where are the pine cones!?!?!?”

Both teams arrived back at the cabin after the 30-minute time limit mark. The whole family gathered to check off the items that Judge Grandma ruled as admissible. Admittedly, we were amazed that, after some deliberation, she allowed the lettering on a Home Depot bucket to count as something shaped like an “E.”

Alas, at the final tally, my team fell short, 13-12. Begrudgingly, I acknowledge that Sam, Parker and Ron won the scavenger hunt. Well, technically.