You must be thinking, wow, Mike, you are clearly not a baseball fan.

I am a huge baseball fan. My first job ever was before I was old enough to work, and the owner of a baseball card store near my house figured out a way to game the system and, rather than pay me to work, let me have store credit if I “volunteered.” At the end of each week, he would tally up my volunteer hours and gift me a store credit. One week, my entire pay … I mean, gift … was a single baseball card, a 1980 Topps Ricky Henderson. 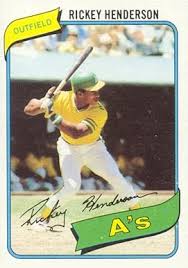 I love baseball. But since 1995, I’ve had a bit of mental roadblock on going to a game. Because that game I went to in 1995? Kinda special.

It was Oct. 28, 1995. The Braves were good. Super good. They had been the team of the 90s. And they finally won the World Series. And there I sat in the stands, with dad. My wife, who was my girlfriend at the time, sat a section away, with her dad.

And to be honest with you, it’s a hard thing to ever top watching your team win the World Series. In person. With your dad. I’m pretty sure if you think about it hard enough, a bald eagle will appear with an apple pie for you.

I have attended games with my kids. But those were minor league games. They have both gone to MLB games, but they did those with their grandparents in Atlanta.

But recently, I ended my streak. We were going to be in Atlanta for the kickoff to the Alabama football season, and my wife caught wind of a Friday night Braves game that was geared for Alabama fans, including a 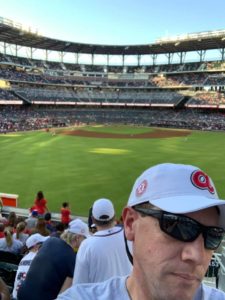 super cool ball cap that had a Bama logo on it.

And the game was everything I could have hoped for. There were Bama fans everywhere, and we all had on our signature caps, and there was no shortage of “Roll Tide” exchanges being passed back and forth through Suntrust Park. I know this sounds like torture to a lot of non-Bama fans, but trust me, it’s a nice evening for us.

The Braves won the game 10-7, and while the game did not have quite the same importance of the game I last saw, it was awesome to be there.

We saw Chipper Jones, who was a rookie when I last saw the Braves play in person. And he is a large individual.

We got to enjoy Suntrust Park, which is an amazing stadium.

We watched The Freeze race – and lose! If you are not familiar with The Freeze, Google it. He rarely loses.

We found out that you can rent ball gloves for free. Yes, for free. You give your credit card, and they give you a couple of gloves. Both of my kids are 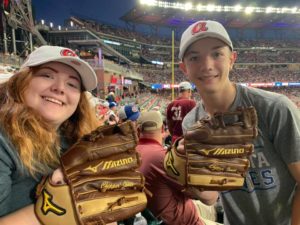 lefties, so they were excited about having mitts in case a home run ball made it our way (it didn’t). I asked the guy at the stand how exactly you could “rent for free”? He told me that if we did not return the gloves, they charged me $750 per glove. I laughed. He did not. He said, “No, seriously.” Rest assured, we returned those gloves.

So we had a great time. And while the time my wife and I went to the World Series win with our dads will always be special, this day was special, too. Because we will always remember the time we saw The Freeze lose.