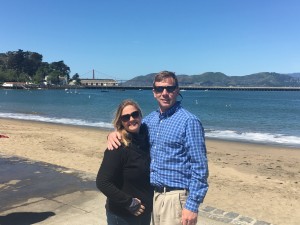 Having just returned from a four-day trip to the west coast, I can tell you this for a fact: I have no idea what time it is.

My wife and I went west for a wedding, and took the opportunity to make it a getaway for just the two of us. The kids were safely locked in their rooms, and their water bowls were filled. Or they were with grandparents. Can’t recall.

We were going to the wedding of a college friend of ours, which meant a bunch of folks in their 40s got together to revert to being college kids. If you are an investor in Motrin and Gatorade, your portfolio is probably looking up this week.

We had a wonderful time catching up with old friends, meeting new ones, and, most importantly, being there to see the beginning of a new marriage. So, without further ado, a few highlights from the trip:

So we’re back home now, tired and a smidge delirious. But we’re a complete family again, and I’m glad to be home and ready to get back into the routine. It was a great trip with some great friends. Hopefully, we can do it again soon. But first, I need to figure out what time it is so I can see if it’s time to chase another Motrin with a Gatorade.