Thirty years ago, I went with my dad on a week-long trip to Arizona. It was one of the most amazing trips of my childhood. My dad is a biologist, and we focused on seeing all kinds of amazing critters – rattlesnakes, roadrunners and coyotes, oh my. It was a constant adventure and discovery after discovery.

Fast forward to today. My son has a thirst for adventure and discovery just as I did at that age. He loves going out in the woods tromping around with his Grampa, discovering new and exciting things. And, just between you and me, he was probably pretty much tired of hearing just how great that Arizona trip was three decades ago.

So when the chance to go back to Arizona and tromp again – with my dad and my son – presented itself, I immediately said, “Nah, I’ve got some shows I need to watch that week.”

I kid, of course. When I told my son we were going to go out to Arizona, he was just a smidge excited. I believe his exact response was, “WHAT? REALLY? SERIOUSLY?”

Prior to leaving, I told him there were two things we would be amazed at: the terrain and the weather. He had never been out west, so he had never seen what a desert looked like. He had also never felt that kind of heat. And yes, it’s a dry heat. So is your oven.

On our flight out, we had a layover in Dallas. About 20 minutes west of Dallas, my son was staring out the window, as the terrain turned to a barren, Martian-like view. It was awesome watching my son see a part of the earth that he knew existed but he had never seen for himself.

When we touched down in Tucson, my son started seeing Saguaro cactuses from the window of the plane. He was very excited by those. I assured him he would see more. Many more. He also experienced his first Arizona heat shortly after landing. He concurs. It’s a different kind of hot.

After several days in the desert, we had checked off a lot of bucket list boxes: 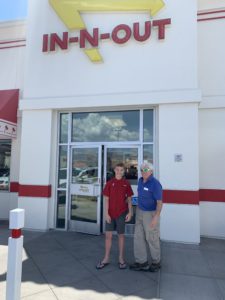 rattlesnakes, lizards, roadrunners, In-N-Out Burger. After about three days, pretty much the only thing my son hadn’t seen that was on his bucket list was a Gila monster. For those of you not familiar with a Gila monster, they are a venomous lizard and they look cool as all get out. But even if we didn’t find one, the trip had been amazing as we had found so much other stuff.

On our last night, my dad, son and I took a night hike through a canyon near us. There was enough moonlight that we could walk the rocky trail without flashlights. Occasionally during the hike, my dad and I would stop and sit on a rock as my son explored crevices looking for critters. My dad and I looked at the stars and talked about the night sky. We talked about how cowboys must have seen the terrain 200 years ago, and what their horses must have thought. If you have the chance to sit on a rock in the desert and talk about this kinda stuff with your dad, please do. I know how fortunate I am, and I don’t want anyone else to miss that chance. 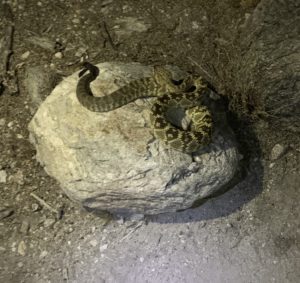 Eventually, we turned our lights on. And we found a couple of rattlesnakes that were making their way, just doing their thing. At one point, I found one, and said, “I got one!” When my son came back to where I was, he said, “Dad! I thought you’d found a Gila monster!”

As we were finishing up the final 100 yards or so of our multi-mile hike, we 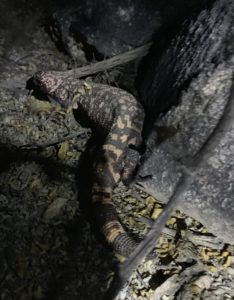 noticed something in the bushes, about a foot to our left. And there it was.

A Gila monster. My son took roughly a bajillon pictures of it. Another hiking group came up the trail and they were excited to get to see one, too. I stood back with my dad, watching my son, his grandson show the hiking group where the big lizard was. It was dark, but I’m pretty sure my dad had as big a smile as I did. I

wouldn’t have wanted to be anywhere else with my son. Or my dad. But the three of us together? Yeah, I’ll take that. 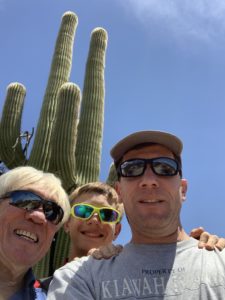