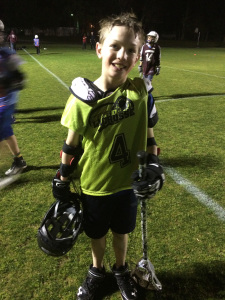 Many moons ago, my wife and I were on our honeymoon and had made a stop in the Bahamas. During a stroll, we came upon an overlook where we could see down into a small stadium where a game of cricket was being played. My wife asked me to explain what was going on.

I stared blankly for a moment. I am an avid sports fan and played gobs of sports growing up, even continuing into my adult years until my knees threatened to go on strike if I continued in a basketball league.

But I had no experience with cricket. So I said to her, “Um, well, you see, it’s, um … I have no idea.” We watched for a few minutes, and we kinda pieced together some of the game, but really felt like we were missing the nuances of a sport that has only been around for some six centuries or so.

Fast forward to this year, and I was reminded of that feeling when my son suited up for the first time to play lacrosse. I have never played lacrosse and neither had my son. I knew the gist of the game — zip the ball into the net. But when I stood by listening to the coach explain some of the intricacies of the game, I was reminded of the description of Whackbat in the movie “Fantastic Mr. Fox.” (Google it. You won’t be sorry.)

Again, the basic point is easy to grasp — score a goal. But I found myself not being familiar with plenty of the terms, which of course meant I had to fake it on the fly, in front of both my son and my wife. (Thanks, Apple! Because of an iPhone, I can subtly look up “What is a midi in lacrosse” and everyone will just think I’m checking work e-mail.)

I’ve enjoyed learning the game and certainly enjoyed watching my son learn the game. Here are a few of the things we’ve learned together:

I’m glad my son is enjoying his foray into the game. And I’m good with that, because I’m starting to become well versed in lacrosse. As long as he’s learning, getting some exercise, and playing his hardest, I’m OK with any sport he wants to try. Except cricket. That one lost me.
Mike Gibbons was born and raised in Aiken, S.C., and now lives in Charleston. A graduate of the University of Alabama, you can e-mail him at scmgibbons@gmail.com or follow him on Twitter @StandardMike.