We know the deal when we sign up: We will most likely have to say goodbye to them.

Such is the reality of dogs.

And we just said goodbye to one of the greatest dogs I have ever known, Maddux the Stoic. 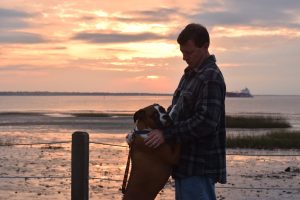 Maddux had a rough start to his life. I feel no need to get into specifics of that, because his first two years of life were the exception. And I feel pretty confident to say his final decade was exceptional, and that’s what I prefer to focus on.

Maddux was a boxer. My wife had boxers growing up, and always told me she one day wanted another one. When the opportunity to rescue one presented itself, we took the plunge. And we never regretted one second.

When I say Maddux was special, I know what you are thinking. “Sure, Mike. All of our dogs are special.” And I agree. They are.

But Maddux had something I’ve never seen in a dog – he was loved by everyone he encountered. I can’t even remember the number of times people told us they would gladly take him off our hands for us. (No thanks, was the answer, by the way.)

His appeal came from a combination of things. He had a stately, strong appearance. But he was as friendly as could be. And not just friendly. He seemed to genuinely care about people. Unlike any other dog I have ever met, he seemed to know when someone needed a pick-me-up. If you were having a bad day, Maddux seemed to know. He would find you in your chair or on the couch and mosey up to you, and just set his head in your lap, occasionally putting a paw gently on you. He was just telling you he was there.

He seemed to sense if people weren’t dog people. On several occasions, he bridged gaps between people who either didn’t really have a thing for dogs or straight up had a fear of dogs. And he won them over with his gentle, soothing nature and his shared kindness. He was just … different.

Like many dogs, he was protective of his pack. But he was welcoming of strangers, assuming he sensed our approval. If workers were at the house, he would often sit near them. Our AC repairman was once working on our unit, and Maddux was sitting attentively next to him. I asked him if he needed me to move Maddux, and he replied, “No, he’s my assistant. We like to talk shop.” 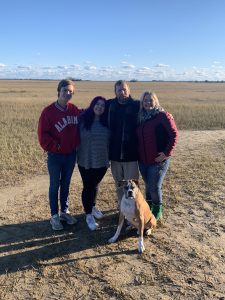 But if my wife and I were not there? He was on guard. I remember one time my son called me at work. He was home alone, and the pest control guy was doing his routine backyard work. Maddux was standing at the door barking, making it clear no one was coming inside. We started noticing that if we were there and the pest control guy came over, Maddux loved to go and greet him and have a chat. But if we were gone, all focus was on protecting the pack.

In the end, however, as so often happens, his body failed him. His legs began to fail. His appetite began to wane. He could no longer walk up the stairs, and we had to carry him to and from bedtime. He and I could no longer do our nightly walks. It was clear he was hurting, and you could see it in his eyes.

On his final day, our daughter came over, and we spent the night as a family with Maddux, sharing fun stories about his antics and just remembering the better times. The next day, when it was time for his final vet appointment, our son carried him into the front yard. He laid down in the grass and soaked in the sun, one of his favorite things to do during healthier times. We sat with him as he soaked in the sun. He’d earned that. 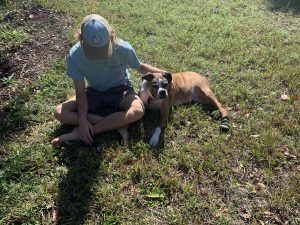 Maddux went peacefully and transitioned to a place where he no longer hurts, and he can run and frolic and be his true self. I know he is gone, but I feel like he is still with us. I will miss him every day, but I am so thankful to have had him as a part of our family.

I will miss my walks with him. My kids will miss playing on the beach with him. My wife will miss how he would weasel his way onto the couch whenever she was sitting there so he could snuggle with her. We will simply miss his presence. And countless other things. But that is the deal when we sign up. And it was the best deal I’ve ever made.