We rarely keep what he catches. Part of that is that a lot of the fishing he does is around the lakes and ponds near our neighborhood, and I prefer my fresh fish not to be marinated in a brine of lawn chemicals and road runoff.

Another reason, however, is that cleaning a fish is a lengthy investment. It’s messy, it takes a good bit of time, and it kinda smells like fish.

But every once in a while, you want to be able to catch your supper. My son had done some research online and found a new pier he wanted to fish. He was positive he was going to catch dinner. I reminded him that, should he catch dinner, he and he alone was in charge of cleaning it. He made it very clear that no one else was invited to take part in cleaning said future catch, as it was his catch, his clean. Fishermen are a prideful lot.

My daughter was home from college and she came with us to the pier. She likes to fish on occasion, but is more of a stand-by-the-rod-and-Snapchat kinda fisherperson. If she catches something, great. If not, at least there was Snapchat.

After an hour he had a few nibbles here and there. I told him we were getting close to needing to pack up, and he offered his usual closing offer, “Five most casts?” Which means 15-20 more casts, because, you know, almost got a bite on that last one…

After fighting for a few minutes, the fish broke the surface. It was a sheepshead, a beautiful black and white fish that hangs out around pier pylons. It took a few more minutes, but he pulled it in, and he measured it to ensure it was the appropriate size for a keeper. It was well within the range. Dinner time! 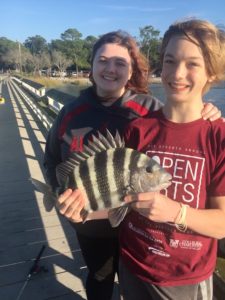 When we got home, my son set to cleaning the fish. Because this is 2018, he first spent about 30 minutes on the couch watching YouTube videos on how to clean sheepshead. The internet is really something.

While my son was on fish duty, my daughter and I went into the other essential component of a fish fry – hushpuppies. We had the hushpuppy mix and read the directions on the side. It said we could either use a deep fryer or bake them in the oven. I asked my daughter which we should do. “What kind of question is that?” she said. Deep fryer it is.

My son soon had the fish cleaned and ready to be dipped in a batter. My daughter tended the hushpuppies on the back deck (I learned early on that deep fryers are an outside game, lest you want your house to smell like a Waffle House for a week; I love a Waffle House, but I don’t want to live in one). Oh, the perfect fish fry was on its way.

In short order, we were loving friend sheepshead and hushpuppies. My wife is not a big fan of fried food, so she politely tasted and then went back to some spinach concoction she created for herself. But the other three of us wolfed down our health food dinner, and enjoyed every fried minute of it. Not sure when we will try and catch dinner again, but I am sure it will be before we know it. And, whatever he hauls in for the catch I’m sure will be a perfect meal for the evening. Thank goodness the internet is there to tell him how to prepare it.