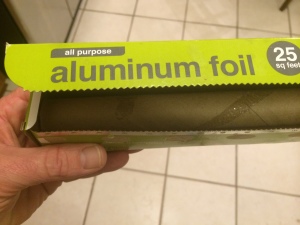 I pulled open the drawer to get some aluminum foil. When I opened the container, I saw that inside was not any aluminum foil, but rather a single cardboard tube.

Now, I don’t know what kind of multi-purposing you do with your foil cartons, but for me, when there is no more foil, there is no more use. I have no need for a long rectangular box with a serrated knife on one side. And I have no use for a small cardboard tube, as it clearly not long enough to serve as a stand-in light saber.

I approached my wife and did that smug little “AHEM” cough as I held the foil-less box in front of me. My wife looked up from her computer. “We need foil. Gotcha.”

“No…well, yes, we do need foil,” I said. “But the current issue is why was this put back in the drawer?”

She shrugged. “No clue. So throw it out.” She clearly did not see the importance of getting to the bottom of this.

I pressed her some more and she sighed (she sighs a lot) and sat back in her chair. She went through her mental database of the last time she used foil and said she honestly couldn’t recall when that was.

The investigation would have to be suspended for the evening, as my wife would not allow me to wake up the children at 10:30 at night for a heated interrogation regarding foil.

The next day, we were all in the car when it occurred to me that I had gone literally minutes without harping on an insignificant issue as if the world’s future depended upon it.

“So,” I said. “Last night I went to get some aluminum foil…”

“…and I found the box had been returned EMPTY! Your mother has provided a credible alibi. Now both of you need to plead your case.”

I stared in the rearview mirror at my son. He had a concerned look on his face. “I didn’t know we had aluminum foil. And I don’t know where we keep it.” A believable defense from an 11-year-old boy who is not fully domesticated yet.

I cut my eyes to my daughter. “And you?” She had an uncomfortable look on her face, much as she had during the Great Case of the Unreplaced Toilet Paper Roll of 2012.

“Well, two nights ago I did use some foil as I was making my lunch…”

And then the case was turned on its ear. “But…” she continued. “But it was the last bit of the foil in the box. So I took the last of the foil out and…” She thought for a minute. “AND THEN I HANDED THE BOX TO MOM!!!”

I looked over at my wife. She was racking her brain to find this event. Turns out, when she was handed the box, she was on the phone, and, based on clear and overwhelming circumstantial evidence, she simply took the box and put it back in the drawer. For what it’s worth, if for whatever reason I wanted my wife to hold, say, a squirrel that had been dead for several days, I would only need to offer it to her when she’s on a phone call. She would without question stick out her hand and take it, but she may also put it in the foil drawer.

As for my daughter, her wrongful accusation stung, but as I explained to her, her long history of such violations made her the natural suspect.

As for my wife, she only accepted the blame with the clarification that while all evidence pointed to her, she had no recollection of the egregious act. And that she’d buy more foil the next time she went to the store. And then she sighed.
Mike Gibbons was born and raised in Aiken, S.C., and now lives in Charleston. A graduate of the University of Alabama, you can e-mail him at scmgibbons@gmail.com or follow him on Twitter @StandardMike.