You know that great feeling of karma when you see someone driving down the road breaking the law and then suddenly a police officer appears?

Yeah, glad I could provide that great feeling to a couple of motorists the other day.

My wife and son and I were traveling down a back highway recently. We travel a lot of back highways, and usually traffic is fairly light. I don’t speed for the most part, but I also don’t like traveling 10 miles under the speed limit for long periods of time.

On this day, we found ourselves the sixth car in a line of cars going about 45 miles per hour. We were at the rear of the pack, so I was going to have to wait for the cars in front of me to pass. And they apparently had little motivation to do that. Eventually, two cars turned off. Then one finally passed. Then another. I was now in prime position to pass.

As we approached a long stretch of road. I took my opportunity and passed the car. And just as I got back into the proper lane, along came a state trooper.

He immediately hit his brakes and turned around. Fantastic.

I pulled off to the side of the road and could feel the laughter as the other car went by me (at 45 mph). 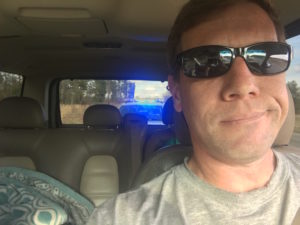 I rolled down my window and pulled my license out of my wallet as my wife retrieved the registration from the glove box. As the trooper approach, I stuck my head out the window and screamed, “I PAY YOUR SALARY!!! ALSO, AREN’T THEIR MURDERS TO BE SOLVED!?!?!?”

Ha! A little bad citizen humor there. I passed on those chestnuts for multiple reasons, but the main one being that, yeah, he had caught me speeding.

As he approached, I leaned out the window and said, “You got me. I was speeding. I know.” I handed him my license, and explained to him that I had been behind that car (along with a bunch of other cars) for about 20 miles, and finally had an opportunity to pass. I told him when he passed me I had was beginning my deceleration but that, yes, in fact, I was speeding at that time.

“I’ve got no reason to think you’re lying,” he said, taking my information.

About two minutes later he came back to my car. “I’ve issued you a written warning. Have a good day, sir.”

No. YOU have a good day, sir. In fact, have a GREAT day, new best friend!

We headed on down the road, and then this thought occurred to me: I needed to find that car and let them know that they no longer got to delight in my comeuppance, because I just got a warning. To do that, I would have to drive probably 90, something that was not going to happen because (a) I shouldn’t be driving that fast and (b) my wife became the ultimate speed monitor in the car every time we hit 56 mph.

At one point, we had this exchange:

ME: So is it like I have a learner’s permit now and you’re the driving instructor?

MY WIFE: I’m not the one who got pulled over for speeding.

ME: You and I have the exact same number of speeding tickets today: zero.

OUR SON: But you got a warning for speeding.

ME: Stay out of this.

I never did find the slow car so that I could let them know about my warning victory, although I did monitor every gas station we passed, just in case. Granted, had I found the car stopped somewhere, I am pretty sure I would not have gone and said anything to them. For one thing, I don’t think my new driving instructor would have allowed it.