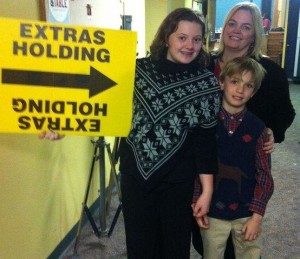 It was just your routine Christmas Eve church service for my family. In April. On a movie set. With Robin Williams.

Yes, we recently celebrated about 30 Christmas Eve services – or at least parts of them – in a single evening, as my family spent a day as extras on a movie being filmed in Atlanta.

The opportunity presented itself rather suddenly. We knew the movie was being filmed near my in-laws’ house. But when plans were made to shoot a scene at their church, the chance to occupy a few extra spots came about.

We knew it was a Robin Williams movie. But, as we told the kids on our way to Atlanta, there was a very good chance we would never see Robin Williams. Or any other actors. In fact, the shot could be scrapped entirely. But the potential adventure was enough of a reason to hit I-20.

When we got to the church, I was filled with memories. After all, this was the church my wife and I were married in. It was wild to see movie crew trucks all over the parking lot and big yellow signs that read “To Set” or “Extras Handling” posted throughout the grounds.

We were directed to an assembly room off the main church. There, we filled out forms and were briefed on what we would be doing.

After about an hour, we were led into the church and told where to sit in some pews off to the side. I looked at the front three pews. And there I saw Candice Bergen. And Clark Duke (from “Hot Tub Time Machine”). And Joel McHale (from “Community” and “The Soup”). And Lauren Graham (from “Gilmore Girls”). And Wendi McLendon-Covey (from “Reno 911!” and “Bridesmaids”). And the guy who played Larry (the guy with the two brothers Darryl and Darryl) on “Newhart.” And then, at the very end, Robin Williams. Just sitting in church.

While we didn’t exactly become best friends with any of the actors or exchange anything more than small talk with a few of them, they all appeared to be, well, really nice. For example, McLendon-Covey was tasked with holding a 5-year-old actor during a scene. He was, um, active. And after a few hours of watching her, I turned to my wife and said, “If she decides to give up acting, she’s got a great future as a nanny, teacher or, more specifically, movie child wrangler.

As for Williams’ famed hyperactivity? None of that was on display, namely because he was not putting on a comedy show, but rather was at work filming a movie. He was amiable and nice and had people laughing when he was doing his scenes. But about the only wackiness was when he helped to entertain another child actor by giving him horsey rides on his lap. He and I did exchange pleasantries as we passed each other in the hall, which, I feel confident, was a highlight of his week.

We went through the first scene a few times. It took about 15 seconds each time, and the director would yell cut, and we’d do it again. After a few takes, an assistant came over to our family. Great, I figured. This is when we get kicked off the set.

“Ok,” she said, pointing to the children and me. “I’m going to need you three right here, in the second pew. She then motioned to my wife and father-in-law. “And you two, right behind them on pew three.” And so, in a flash we were sitting there on the front middle pews, right there with the movie family of Candice Bergen and Robin Williams.

This was on Friday evening, and I have to say one of the more surreal moments of the day was sitting in a pew about two feet from Robin Williams as another actor gave him an update on the Boston Marathon bomber case. Williams seemed as surprised as the rest of us that the suspect was taken alive.

Who knows what kind of release the movie will get. And who knows whether or not our scene will even make the cut. And, if it does, who knows if we’ll even get a moment on the screen. But that’s not why we went. We went for the adventure. It was an awesome time and, if nothing else, I can take away this little nugget: Robin Williams can now tell all his friends that he said hello to me as he left a church bathroom. Lucky fella…

Mike Gibbons was born and raised in Aiken. A graduate of the University of Alabama, you can e-mail him at mwg1234@yahoo.com or follow him on Twitter @StandardMike.