As I stood at the base of the waterfall, the cool mist sprinkling over my face, I thought of the centuries of time that had passed as the waters flowed over these very rocks. I closed my eyes and reflected on the steady, relentless consistency of water, unfazed by time. And then I thought, “If I slip and fall here, I will have an incredibly bad day, as that water is really cold, there are lots of rocks out there, and my phone is in my pocket.”

Thanks, brain. Always there to drop a note of treacherous potential in the most serene moments.

I tried to flush the slipping concern out of my head and get back to enjoying the waterfall. I was there with my son, and he was busy crawling around on rocks with a flashlight, looking into crevices trying to find salamanders.

We were in North Carolina, where we had traveled for a couple of days to tromp around and look for salamanders and waterfalls. Yes, oddly specific. 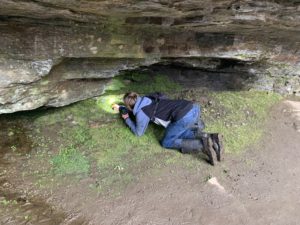 My son loves finding critters, and keeps a “life list” of his animal finds. He is most proud of his reptile and amphibian list (current species total: a pretty impressive 145), and is always looking to expand that species count. He identified an area that is rich with salamanders, so we decided to set off to see what we could find.

We had a great time and found some wonderful waterfalls and super cool salamanders. But, of course, we also had some interactions with people. So, a few observations:

All in all, we had a great trip and saw lots of beautiful things over two days. I am looking forward to our next field trip, so we can get out there and really take in the serenity that nature provides us. And hopefully not slipping into a creek.