My son and I were driving by the park the other day when he excitedly said, “WHOA! DAD! LOOK!”

Now, with my son, he could have seen many things. A large bird. Someone wearing a festive hat. A tricked out car. My son has a zest for life and really enjoys seeing cool things. And he loves sharing those experiences.

“What?!?!?” I said as I scanned the horizon, perhaps looking for a bald eagle wearing a sombrero and driving a dune buggy.

“That guy!” he said, motioning back to the middle of the park. “Is he…is he on a tightrope?”

I looked back in that direction and saw a man who appeared to be hovering about two feet off of the ground, and occasionally bouncing a bit in the air and then coming back to rest on his spot above the earth, only to take a few more steps, seemingly levitating.

I turned the corner and drove where I could get a better look. I noticed a thin red line stretched between two trees. “Parker,” I said, “it appears that is, in fact, a guy on a tightrope. We’re pulling over.”

We pulled into the parking lot and began our march to the local Wallenda. This kind of experience is commonplace for my family, as when we see cool things happening, we are obliged to investigate. And, generally, we have found that people doing cool things in public are more than happy to share with you what they are doing. If you see someone on a street corner, say, juggling pineapples, it’s pretty rare for him to say, “Go away. I’m pineapplin.’”

When we were about 10 yards away, he looked up, and I gave a friendly wave. I told him we were driving by and saw his … whatever it was .. and were just curious about it. His name is John, and he introduced us to the world of slacklining.

A slackline is what would happen if a trampoline and a tightrope mated. It’s about a two-inch-wide strip of trampoline-quality fabric that is strung between two trees (or I suppose, two posts, or columns, or two very large defensive linemen, if available). In this case, it was trees.

Once taut, you can walk on the slackline, which gives a little bit but still holds you up. Or, you can bounce on it, as you would a trampoline.

The rope was probably about 30 feet long, and John told us about how he got involved in it, and some cool stories of what some of the big time slackliners can do. (Youtube it. You won’t be disappointed.)

We watched John bounce on his chest a few times and bounce from his bottom into a flip dismount.

He asked Parker if he wanted to try it out, which Parker declined, as it might not be safe and his mother might not approve.

Ha! Little daredevil humor there. Safety and mother approval never came into play. I had him hoisted up on the slackline before the offer was complete. Parker walked a few steps on it, getting his bearings as I held his arm,  bouncing a little here and there. 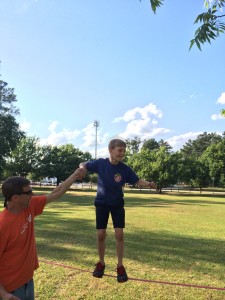 I took a brief turn bouncing on it, to the point where the thought of attempting a flip dismount became a distinct near-future occurrence, at which point I wisely dismounted the safe and standard way. I am fairly certain that 10 — and certainly 20 — years ago, I would have immediately tried something that would have been, well, stupid. I got to be a 41-year-old daredevil by gradually realizing limitations. These days, I need to work up to the tough stuff.

We chatted for a few more minutes, concluding with where we could purchase a slackline and the knowledge that they are surprisingly inexpensive. We did not factor in future orthopaedic visits into the cost.

My wife is less than keen on the idea of us getting a slackline, but I have assured her that it is a perfectly safe activity, based on the fact that Parker and I have gone injury free in 100 percent of our slacklining experiences. Alas, even stone-called statistics won’t sway overprotective moms.

I’m glad we stopped and chatted with John. Life is full of interesting people who do interesting things, and your life is just better when you stop and get to know them. Plus, you never know when you might meet someone who has a sombrero-wearing eagle that drives a dune buggy.