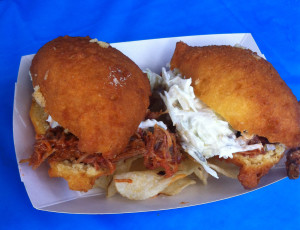 This past weekend was a foray into a world of deep-fried deliciousness. And, for a little while, deep-fried regret.

I ventured into my deep-fried adventure during Aiken’s Makin, the annual craft fair in my hometown. While crafts are aplenty, I head there every year for one reason – my wife makes me go.

On Friday, I headed out alone for lunch. Just a man and his appetite, together on a quest for deliciousness.

I found myself drawn to one station that had the mother of all offerings. There, on the front of the cart, were banners advertising the dozens of choices inside that one spot. Gyros, Italian sausages, corn dogs, nachos, barbecue, deep-fried … everything.

When I got to the window, I had several options in my head. “What can I get you?” the man asked.

“Fried chicken on a stick,” I blurted out, instinctively. In no time, there it was — a glorious stick piercing glistening hot fried chicken. As I walked the two blocks to my car, devouring my health food lunch, I thought to myself, “This may be a long afternoon.”

Indeed, an hour or so later, I was not pleased with my choice. While flavor was the big winner, my dignity had gone down a bit. I was not proud. However, by 11 p.m. or so, the taste of fried chicken had started to fade from my mouth, so I could start planning on Saturday’s culinary adventure.

And what an adventure it would be.

I was there with my family, and we did our usual recon of all things food.

Eventually, we made our way to the end of the fair. And there it was. Situated at the very end of the crafters was a tent with a line of people snaking long beyond it. A sign read, “Stuffed Puppies.”

When we got close, I saw what they were lining up for – an oversized hush puppy, cut in half. Its insides were scooped out just enough to make room for barbecue, which was then topped with cole slaw. The top half of the hush puppy was placed on top, creating a sandwich-type thing that was so unbelievably American that, if you held it to your ear, it hummed the national anthem.

Thinking we had reached the summit of the food mountain, we made our way to find a place to sit and eat. As we passed by several more vendors, my son said, “Dad, we should get a fried Twinkie.”

Yes, son. Yes we should.

I have heard of the fried Twinkie, but had never partaken. Being on a mystical food journey, it would be wrong to skip this legend of deep-fried awesomeness.

I watched as they battered the Twinkie and dropped it into the hot oil. I am not certain, but, right when it hit the oil, I think the Twinkie whispered to me, “I love you…”

When we sat down to eat, my son and I polished off our Stuffed Puppies in short order. You can try and savor the moment, but each bite just made you want to get to the next bite sooner. And, we knew there was a fried Twinkie at the Stuffed Puppy finish line.

Fried Twinkies become much larger than the original Twinkie, so my son and I tore it in half and dug in. I would tell you what it tasted it like, but that would be like telling you what the Grand Canyon looks like or what bungee jumping feels like. You just have to experience it yourself.

My mother-in-law, who had also enjoyed a Stuffed Puppy, was offered a bite of fried Twinkie. She apparently saw the savage looks on our faces and passed.

Later that evening, my body did tell me that it understood my choices, but was not pleased with them. I assured my body that this is a once-a-year bender, and I will go into super duper healthy mode immediately. Unless I find a place selling Stuffed Puppies.