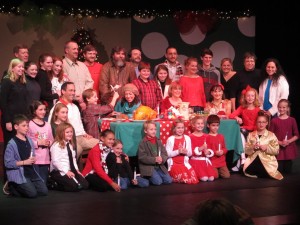 You know the old slogan: “But what I really want to do is direct.”

Turns out, there’s a reason for it. Directing is awesome.

Now I’m not suggesting Spielberg and I are going to be doing lunch dates any time soon, but my stage directorial debut has been an absolute blast.

I’ve been involved with theater for a while. I did a show back in high school, and then took about 20 years off before I got involved again at the Aiken Community Playhouse. My daughter was trying out for the show “Best Christmas Pageant Ever.” Not a lot of adults showed up, and they needed someone to play the harried father of two. It’s the part I was born to play!

I’ve been on stage plenty of times since and behind the scenes as well, usually as a stage manager. For those not familiar, the stage manager is the one who runs the show from backstage. And any time you hear a loud crash, thump or boom backstage, rest assured that is immediately followed by the stage manager saying, “WHAT WAS THAT!?!?!”

But when my chance to helm a show came about, I decided I was up for the challenge. The show, “Dear Santa,” is a series of Christmas vignettes reminiscing about the magic of Christmas, in particular through the eyes of kids.

The cast is a big one – 19 kids and seven adults. Combine that with the backstage parents and the backstage crew, and we’ve got a lot of personnel. Fortunately, it’s a great group with great chemistry. The show has gone up, and we’ve got two more weekends to go. Here are a few things I have learned as a first-time director:

– The hardest part of directing is not being the stage manager. As a stage manager, I have been fortunate to work for directors who were pleased to turn over the reins when the show opened. They let me do my job. My choice for stage manager, Janette, is someone I had worked with before, and someone in whom I have complete confidence. That said, it was hard to let go. A stage manager sets the stage before hand, handles scene changes, etc. It was tough not to say, “Hey, we should put this here…” On opening night, I took a deep breath and retreated from backstage to let Janette do her job. (Which she did fantastically). By my estimate, I only sent her 43,000 texts during the two-hour run of the show.

–  Enlist people who can read your mind. For example, my set designer was given this edict: “Make it look Christmassy.” Fortunately, she has been reading my mind for 20 years, and could even follow me around the house with set mock-ups saying, “No, look at this. Look at it. Look at it. Now.”

– Be honest with everyone. While that’s a fairly solid piece of advice for all of life, it’s particularly true when dealing with kids in theater. I tried my level best to make sure kids got time on stage, and that they did not waste time at rehearsals. That said, sometimes time ran out and some scenes were not rehearsed on a particular night. So, when I was asked, “Mr. Mike, are we going to do my scene?” I was always 100 percent honest: “Go ask the stage manager.”

– Relax. This is community theater. While of course we want to do a great job and entertain our audiences, we’re all volunteers giving a lot of our time for something that we hope is rewarding onstage and off. But none of us are getting rich doing this, and we’re most likely not going to use this as a springboard to Broadway. Go out and have fun, and everything else will fall into place.

So it’s been a great ride, and I hope I get the chance to do it again soon. I hope my cast and crew have had as good a time as I have, and that they all stay involved in theater. It’s a great second home to have. And while directing is fun, I, of course, will always keep my eyes open for diverse and wide-ranging parts to audition for, as long as it’s a harried father of two.