If there is a book title that accurately describes my son, it would definitely be, “Dude, seriously, what makes you think that’s a good idea?”

Ok that’s probably not an actual book. But it would sum him up pretty well, oftentimes when he is, say, stringing his hammock 40 feet in the air.

But if I were to pick an actual book title that accurately describes my son, it would be a 2017 book titled “I Love Learning; I Hate School.”

This sentiment is what made his high school graduation last week a wonderful end to a really long journey for him.

Many of you know (or know of) Parker. And often people most relate to him being outside catching critters or tromping in the mud or riding his unicycle. Before he was old enough to drive, he would unicycle through the neighborhood to one of his favorite fishing spots, his fishing pole on his shoulder. I would always remind him to make good decisions, not just because it’s the right thing to do, but also because it’s pretty easy to narrow down suspects when it’s described as a “teenager on a unicycle carrying a fishing pole.”

And that is why he walked across the stage last Friday night and accepted his diploma. He checked the boxes. And he did so with a lot of help along the way, from some amazing villagers who all helped raise a pretty cool kid. 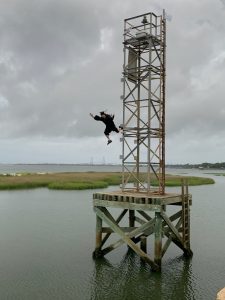 I am thankful for that elementary school teacher who understood that Parker just didn’t care about chapter books, but she still wanted him to read. So she let him do his book reports on field guides he was reading. She said it was the first time she’s gotten book reports on a salamander field guide followed by a mushroom field guide.

I am thankful for the high school teachers who “got him” and realized Parker was a really sharp kid who was doing some really cool things, but maybe needed a tweaked approach in some of the ways he learned.

I am thankful for our many naturalist friends who have seen Parker grow up in the woods and in the swamp and on the water, and who have provided guidance, knowledge, and a healthy dose of humor to keep his ego in check.

I am thankful for wonderful friends who have been a safety net/cheering section all through the years.

And of course, I am thankful for a large, loud, wonderful family who definitely gets that Parker is a bird of a different feather, and how they have been there all along the journey encouraging him to fly.

A lot of people have asked us what Parker is doing post-high school. The answer: We’re going to figure it out. He’s taking a gap year and is first doing an internship tracking rare reptiles and amphibians in a nearby national forest, which is pretty on brand.

After that? We’ll figure it out. The idea of the traditional college life is not something that is appealing to him. He is far more interested in tegus than togas, of finding a Farancia, not a fraternity. (A little one-two herpetological humor punch for you there. If you didn’t get it, fortunately, you have your cell phone, and thus access to all of the world’s information.)

But wherever this next journey takes him, I know it will travel through marshes and deserts and rivers and swamps and mountains, with a lot of cool critters along the way. And lots and lots of learning. Because, man, that kid loves learning…