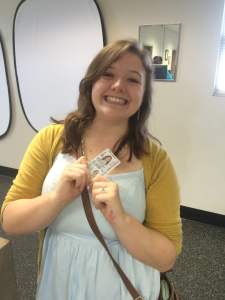 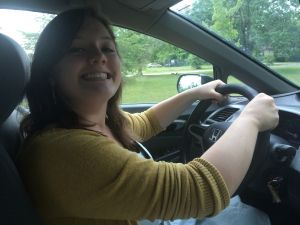 Last week, I told you my daughter was about to turn 15 and was preparing to take the test to get her learner’s permit.

This week, I write to inform you that the world has one more driver in it, and she’s not as horrible at it as you might think.

Yes, she passed her driving test and is now legally allowed to operate a motor vehicle assuming I am in the passenger seat saying, “BRAKE!” and “STOP SIGN!” every 10 or so seconds.

We arrived at the DMV right as it opened. Had I been willing, I think my daughter would have gladly spent the night before on the door step.

In short order, she was in the testing room. When she emerged, it was fairly easy to see she had passed, since her grin was about seven feet wide.

Quick side note — you know how DMVs get a fairly universal bad rap? These folks could not have been nicer. They were kind and efficient, and wished her happy birthdays and congratulations along the way. So, good on you, DMV.

Anywho, when we left, I told my daughter that she would NOT be driving out of the DMV, as it sits on a four-lane highway.

I pulled onto a side street toward our destination. I stopped the car, put it in park, turned to her and said, “Are you ready?” I found myself staring at an empty seat, as she was already at the driver’s side window bouncing on her toes.

As she settled into the driver’s seat, I went through the checklist. Foot on the brake, parking brake off, shift to drive, remember that I am the primary breadwinner in the house, etc.

She actually did, well, not bad. She went kinda slow, which is OK, at least for your first time behind the wheel. She did do a running third-person commentary that went like this: “OK, Allie, speed limit is 25. Allie, you’re going 23. That’s OK. Allie, a car is at that stop sign. Make sure it doesn’t pull out in front of you, Allie.” I told her that talking to herself like that was probably something she should shelve by the time she takes the actual driving part of the test.

When we arrived at our destination, she put the car in park, pulled the emergency brake, turned the car off and took off her seat belt. She calmly emerged from the vehicle and proceeded to do an impromptu victory dance that I wish I had captured on video. The chants of “I drove! I drove! And I didn’t wreck!” echoed through the city.

“No, you weren’t. It was your first time. You’re not going to be Mario Andretti on the first try.”

Perhaps I need to update my sports references.

She has driven several more times, and I have upgraded her score to a 6.5, a grade she still disputes.

I will keep driving with her, as my wife has opted not to assume the co-pilot position until sometime after the sun burns out. When pressed on this issue, my wife explained to Allie that she is not comfortable riding with anyone, including me, even though I’m a very good driver. I confirmed those points to Allie, and reminded her that, on most family vacations, the most common thing I say to my wife in the car is “I DON’T NEED YOUR HELP DRIVING!!!!” I don’t think it would be a good combination for the two of them at this point.

I will keep working with her (assuming she stops saying “Can I drive?” 1,000 times a day). And she will be taking driving lessons from a professional in the near future. I am sure she will continue to improve, and will one day be a perfect 10 when it comes to driving. My wife promises to ride with her when she’s an 11.