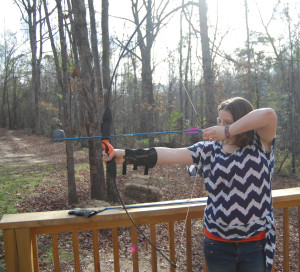 When the zombies attack, I’m sticking with my daughter.

I know what you’re thinking. You’re thinking, “Aww, what a super awesome dad who will be protective over his baby girl.”

Let’s just call it an added bonus that she is apparently a bow and arrow prodigy.

The kids got a bow and arrow set for Christmas. There are strict rules for the arrows:

Ha! Little bow and arrow humor there. The kids are good on bow and arrow safety regulations. (A bow is always loaded.) I have counseled them on the ways of safety, and they follow the rules strictly. “So everyone remember – if we follow the rules, (a) no one gets shot with an arrow and (b) your mother has no reason to take the bow and break it in two.”

We were out at our land, and my son set up targets. Our targets included two large burlap sacks, a cardboard box, a hay bale and a 2-liter Coke bottle. The targets also came with an elaborate scoring system that my son set.

I was the first to go. I launched six arrows, two of which passed within a good 10 feet of a couple of targets. Clearly, I needed to calibrate my shot, as several of them went WAAAAAY high, leading to about a 15-minute search to find the arrows. (Fun fact: Shooting an arrow as far away from you as you can into a leafy hillside can make words come out of your mouth that you instantly regret!)

My son went next. He had the opposite problem of me and was sending his arrows into the ground about halfway to the target. At least they were easy to recover. He remedied this by altering his shooting style, turning his bow sideways and saying, “I’m Hawkeye.” I’m assuming he means the bow-wielding Avenger, not the M.A.S.H. character. His shots went farther, although the targets were spared.

Next came my daughter. I began to coach her on what she would need to do, when it occurred to me that the extent of my archery knowledge consisted of “Pull arrow back; let arrow go.” But being the kind of teacher a dad should be, I tried to offer some help to her. She then reminded me that she had shot arrows before, during an archery class at her school.

She steadied the bow with her first arrow. THWOMP. Right in the burlap sack. Next arrow: THWOMP. Pierced the burlap sack. Third shot: THWOMP. Into the hay bale. Her next three shots were aimed at the Coke bottle, and while they did not strike the target directly, had the Coke bottle been an approaching zombie, it would have gotten an arrow right in its undead torso.

After a few more rounds, my shooting was not improving, so I did the smart thing and told the kids, “Yeah, I need to go and, um, do something, over there, I think.” My son, who was finding some success with his Hawkeye method, decided his archery time was good for now and opted to go search for critters.

My daughter, however, stayed at her spot, firing arrow after arrow. Most every time – THWOMP. Right on target. I watched her shoot over and over, and I saw a nice steady calm come over her as she shot. She focused in on the target, pulled back the arrow slowly and smoothly, kept her hand steady, exhaled and launched. I could tell it was a very Zen place for her. I like that she not only enjoys the shooting but wants to continue to practice and to get even better. For one thing, we’re going to need her at her best when the zombies come.